A Park of Inclusion

It can be heartbreaking to bring a wheelchair bound loved one to a water park to escape the heat, only to find out at least half the rides are not designed to accommodate them. Not only is it frustrating, it’s disappointing. However, a brand new park in San Antonio, Texas has been specifically designed to change that. Morgan’s Inspiration Island, the splash park branch of Morgan’s Wonderland, has been officially deemed the world’s very first ‘ultra-accessible’ water park, where every ride and corner of the park is guaranteed to be wheelchair accessible.

Sponsored by Toyota and developed by the Gordon Hartman Family Foundation, founder Gordon Hartman announced to the media the positive message, “Morgan’s Inspiration Island promises to give individuals with physical or cognitive special needs a place where they can splash and play without barriers,” and proudly proclaimed that, “Like Morgan’s Wonderland, Morgan’s Inspiration Island is not a special-needs park; it’s a park of inclusion.” 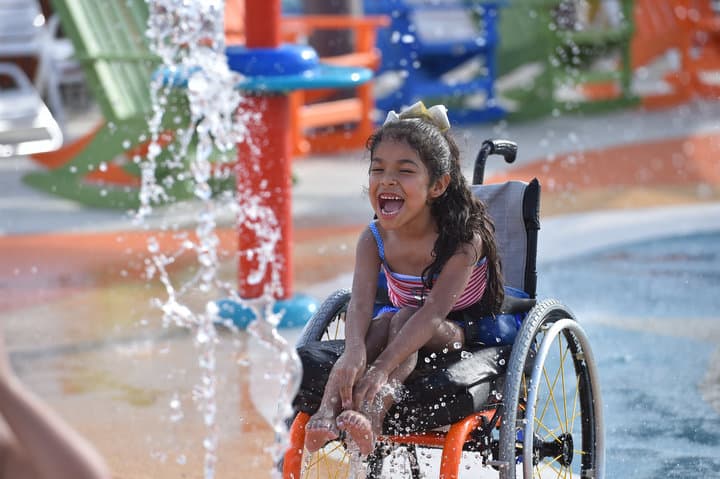 Morgan’s Wonderland is a twenty-five acre non-profit theme park for all ages and abilities, and officially opened it’s water park section in May of 2019, debuting a tropical-island paradise complete with calico splash pads, fun rides and revolutionary waterproof wheelchairs available to its visitors to continue its mission of inclusion. Here are some of the attractions currently offered:

Certain muscle conditions can cause muscle pain when exposed to non-heated water, so Whataburger has partnered with the park to bring your loved one the calico splash pad, “Rainbow Reef”, equipped with several interactive water features, including geysers, giant seahorses, a sea turtle, a starfish, as well as a large spouting octopus!

Interested in a musical experience on a hot day? Come visit their musical paradise, “Calypso Cove Music Garden”, featuring a large tree with a rain-curtain effect coming from its branches, and surrounded by a variety of musical instruments in the shape of mushrooms, a moss-covered log and equipped with several interactive pools and geysers to promote water play and musical creativity! A large and colorful butterfly and frog sit atop two large “mushroom” rain trees, giving the park a feel that is larger than life.

Presented by the Harvey Najim Family Foundation, splash your way through 200 gallons of fun at “Harvey’s Hideaway Bay”, featuring a 200 gallon water dumping bucket, mini water cannons lining a wheel-chair accessible ramp, with another line of cannons on the opposing side, ready for an all-day skirmish! “Harvey’s Hideaway Bay” also features a “kids only” water fort, surrounded by even more gushing geysers, dumping banana buckets and a plethora of colorful animals.

Visitors can also cruise down a calm river filled with animal sounds and exotic animal displays on the “River Boat Adventure Ride”. Float in a boat down more than five minutes of twists and turns, soaking in the sounds, the scenery and the beautiful day in this wonderful park, presented by H-E-B.

The park is located at 5223 David Edwards San Antonio, TX 78233, and ticket purchases as well as donations can be made to the Morgan’s Wonderland website. This park may be the first of its kind, but with its example comes other parks that will follow suit to make more accommodations to those with any disability. Fun under the sun is not reserved for one group, and Morgan’s Wonderland is working to redefine that ideal for everyone. When a child enters a water park, usually their first words are “I’m going on EVERY ride in the park”, and thanks to Morgan’s Wonderland, Toyota, and every foundation/organization associated with its design, a lot more kids can confidently say that.