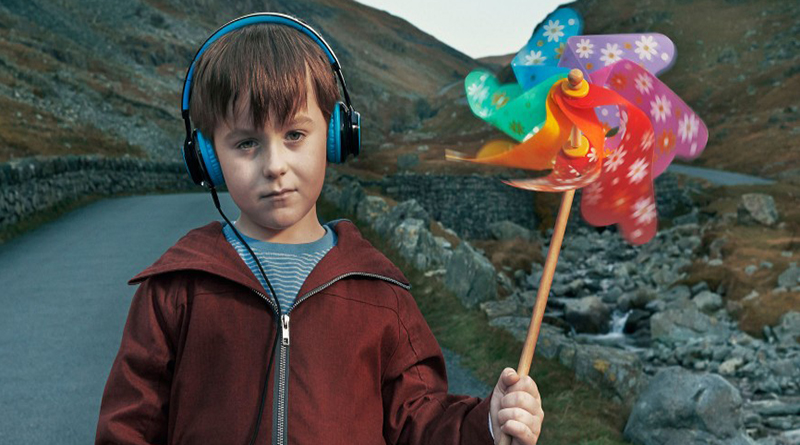 The a Word, the series broadcast on Sundance Television this past summer, features some of the most accomplished acting and cleverest dialogue I’ve ever seen on television. It also boasts the noisiest kissing I’ve heard since my cousin’s 13th birthday party.

The a Word is based on an Israeli television drama, Yellow Peppers, and began its English-language life in Britain in March of this year before debuting in the U.S. in July.

It begins on the birthday of five year old Joe. His parents, Paul and Alison, have planned (if you’ll excuse the pun) the mother of all parties, with an entertainer, games, and a cake that could double as a Disneyland ride. But Joe is less interested in the entertainer or even the cake than in dancing to his own private concert: He’s obsessed with rock music and rarely takes his headphones off.

Sounds like a lot of kids you know? Of course. And that’s what helps his parents, especially mom Alison, to rationalize his behavior. Lots of kids have tantrums when they get overwhelmed. Lots of kids ignore grown-ups’ requests.

But do lots of kids repeat back what’s said to them instead of answering questions?

Paul and Alison see a specialist, hoping that she’ll say that nothing’s wrong. Alison praises Joe’s abilities: “He’s a musical genius. He knows four songs by heart.” And she makes excuses for him: When Joe stares at a puzzle, unresponsive to the therapist’s encouragement to put it together, she says, “He doesn’t like puzzles. They’re too easy for him.” She explains his lack of friends: “He doesn’t like kids his age because he’s smarter than they are.”

Oh, honey, we’ve been there.

But this is the point where viewers may start to distance themselves from Alison. I certainly did. In her desperation to make this “problem” go away, she puts her brother and sister-in-law in a situation that threatens their marriage. Later she trades on her father’s friendship with a police inspector to insist he “turn a blind eye” to the illegal status of her nanny.

We might forgive her these actions by placing them under the rubric “Grizzly Mom,” if she didn’t go about it in such a bullying way, while ignoring all of her daughter’s needs (Joe’s older sister, 16 year old Rebecca).

My own dislike of Alison reached its peak when she hounded Joe into expressing grief over the departure of aforementioned nanny. “Are you sad? Are you sad?” she prods him until he confirms her opinion and acts out.

Alison can no longer differentiate between her own needs and Joe’s.

Alison, we learn over the course of the six episodes, is used to getting her way, and when she can’t bully or wish Joe’s differences away… well, “you’re ashamed,” is husband Paul’s diagnosis.

So ashamed that when Joe goes missing she’s reluctant to tell the search party that he’s on the spectrum even though that might help them find the small boy in the isolated Lake District of England where they live. (Shots of the surrounding countryside are one of the ancillary pleasures of the show.)

This is exceptionally good television, but it’s still television, which means that Alison learns her lesson. “If we can just get him back I won’t try to change him.”

Which is good to hear, because the one who has to change is his mother. The “a” word of the title is “autism,” but ironically, it could also stand for “Alison.”

Neurodiversity and Fitness: Working the C.O.R.E of Different Brains

Who are the Mentors in Your Life?

Jill Poser – Kammet, CGCM discusses mentors, and how her grandparents helped her find her calling.