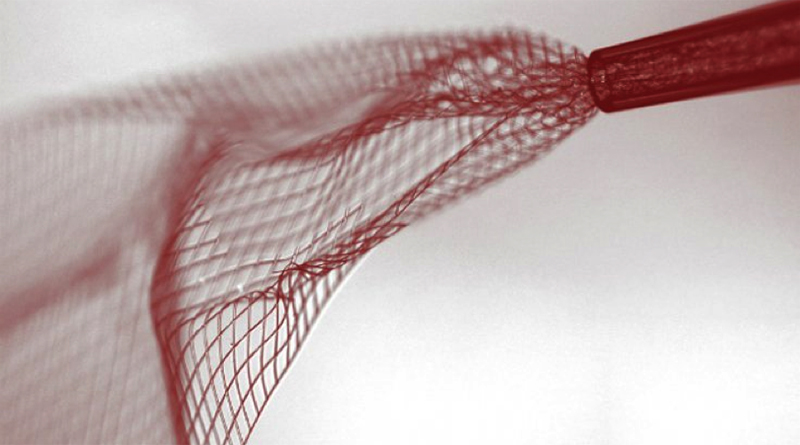 No more dangling your arms through a forest of outstretched limbs, phone in hand, to capture a slice of reality on a screen while you, well, miss it. In due time, our eyes may be enough.

A group of scientists from Harvard and The National Center for Nanoscience and Technology in Beijing have developed a syringe-injectable neural net that can overlay and interface with neurons. In other words, they’ve figured out how to plug your brain into the Internet. Here’s how it works: an ultra-fine electronic mesh gets rolled up and sucked into a .1mm-diameter syringe, then squirted through the skull, where it unfurls and envelops the brain like wet paper-mache. Once embedded, the mesh forms a seamless brain-machine circuitry linking neural activity with outside electrical gadgetry.

Want to turn the lights off? Well wanting it is enough, they’ll just turn off. Can’t remember which year Thomas Jefferson was elected president (1801)? Not to fear, that information is right at your mental fingertips; think the question to Google the answer. And don’t worry about taking photos, just upload your visual memory to the cloud.

The applications are varied and endless, but I’m getting ahead of myself. At the moment, concerns are less…sci-fi, sort of. The brain is still largely an untrampled frontier—it’s a mystery how relatively simple individual brain cells coordinate to give rise to higher cognitive functions like perception, emotion, or consciousness. With the net, researchers could analyze data from thousands, even millions of neurons at once, painting a picture of the brain with unprecedented detail.

But observation isn’t the only application. The net can also stimulate neurons, which paves countless new avenues for treating neurodegenerative disorders like Parkinson’s.

At the moment, the meshes are being tested on mice, with promising results. Meshes consisting of 16 electrical elements have been implanted into two brain regions of several mouse subjects and there’s been no negative immune response. Instead, the mouse brain tissue has actually begun to grow around the mesh. Neurons “look at this polymer network as friendly, like a scaffold,” says Jia Liu, a member of the Harvard team.

The phenomenon makes for a beautiful, if not eerie picture, one that perhaps foreshadows our future: a blurred line between biology and technology. Which brings me back to the sci-not-so-fi. For all its exciting potential, the mesh forces us to ask a fundamental question: what do we sacrifice with such extensive interconnectivity?

Maybe nothing. Maybe it works swimmingly and the only change is for the better. But it’s worth considering what it is we give up as we push inevitably forward. Privacy? Individuality? The ephemerality of a violet-streaked sunset?

I don’t know. But whether or not my eyes are one day camera lenses for an infinite string of photo-memories, when the sun sets beneath warm splashes of red, orange, and purple, I won’t blink. Elon Musk briefly discusses the “neural lace,” as he refers to it in homage to science fiction writer Iain Banks, in this interview starting at 37:38 (it should jump straight to that time when you click the link).

Also, the negative potential of this sort of technology was really wonderfully explored in an episode of the Netflix series Black Mirror. Season 1, episode 3: The Entire History of You delves into the downsides of an instant-retrieval cloud-like memory. And it’s an anthology series, so each episode stands alone. If you don’t have Netflix, the episode is available on YouTube without any hassle.

Share on FacebookShare on TwitterShare on Linkedin
Champe Barton

Champe Barton is a student at the University of Florida. In his blog, he likes wondering, investigating, and surprising himself with the strangeness and beauty of science. He founded, runs, and writes for Trout Magazine, a literary satire magazine based out of the university. He also curates a daily newsletter dealing with politics and current events called The Murrow Daily Report and writes a personal blog called The Wannabe Liar. The magazine can be found at TroutMagazine.org, the newsletter can be subscribed to by sending an email to MurrowDaily@gmail.com or checking out Facebook.com/MurrowDaily.

The Never Quite Empty Nest

When Different Brains Grow Up: the NDSS Adult Down Syndrome Summit

Dr. Hackie Reitman discusses the importance of giving support to people with Down syndrome through adulthood, and how the recent NDSS Adult Summit highlighted this growing concern.