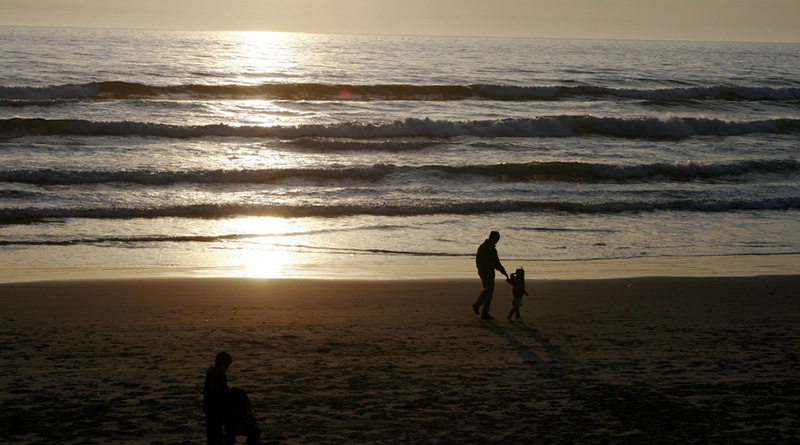 As a child, I was aware that my Uncle Mike was a little bit different: a little quieter, a bit less social, prone to mumbling and stammering when he spoke, with a habit of avoiding eye contact. These differences weren’t problems or issues that needed resolving. They were just aspects of his personality, like his pale blue eyes, his low ponytail, the silver jewelry he liked to wear. Uncle Mike was quiet, like me. He was probably the only relative I had who never put me on the spot or tried to make me interact with him when I wasn’t in the mood. And I think I might’ve been the same for him, at ease standing beside him without needing him to engage. We were comfortable in silence, and so a lot of my early memories of him aren’t of things that happened, but of the times between things happening, the quiet pause of reflection, the shared silence required for observation.

Long before I’d ever heard the term Asperger’s, I learned to accept my bright, shy uncle for who he was. He was funny and soft-spoken, and even though he was nervous in social interactions, he always came to our family gatherings, where he’d take up residence in the perimeter of the room. He was amazingly well-read. He seemed to know everything about everything. After learning that I was a vegetarian, he memorized several exotic vegetarian recipes, and whenever we spoke he’d share one of them. When a friend of mine mentioned that he liked to sail, my uncle rattled off every type of sailboat imaginable, going through the different specifications of each. He lived a life of routine and sameness: frequenting the same restaurants and stores, eating the same meals, socializing with a narrow group of individuals. He was complex and special, sweet and reserved.

My uncle Mike was well into his forties when he was diagnosed with Asperger’s Syndrome, and while having a name for what made him different was handy for him and us, it didn’t change anything about my relationship with him. I admired him, as I always had, but even more so after learning that he had Asperger’s. He’d managed to take a challenge and turn it into an asset: finding his comfort zone, acquiring a few good friends, gathering knowledge to share with those he loved and wanted to engage with. He once called me up out of the blue and asked if he could take me to a Rolling Stones concert. This was classic uncle Mike. He was unpredictable in a good way: seemingly spontaneous, because in his quiet nature, we couldn’t see the lengthy and complex thought processes behind his actions.

As time passed, I realized that the true lesson in our relationship wasn’t one of me learning to accept my uncle Mike, but of me witnessing how he’d learned to accept himself, and aspiring to follow his example of embracing what he loved, learning as much as he could about what interested him, prizing honesty, and cherishing the close connections he had.

When I was first crafting characters for my novel, The Art of Adapting, a story about a woman finding her footing after separating from her husband, I thought of my uncle Mike’s capacity for humor, compassion, and honesty, and I wished my character Lana had someone like him to light the way for her. So I gave her a brother with Asperger’s Syndrome. The character of Matt is inspired by my uncle, and has some of his speech patterns and mannerisms, but as the story progressed, Matt grew into his own character. I put him into his own family, and gave him unique situations, and watched him develop. And as he grew into the story, he became the foundation of it.

Sadly my uncle Mike passed away before the novel was written, so it is not only inspired by him, but is a tribute to him and all of the joy, spontaneity, wit, and humor he brought into my life.

I’ve been genuinely touched by the positive feedback I’ve received from readers about Matt’s character in The Art of Adapting. What means the most to me is that the responses have not focused on what makes Matt’s character different, but what makes him necessary to the story, a compelling part of the family, and a blessing to those he affects throughout the novel. Like my uncle Mike, his Asperger’s is a significant aspect of his personality, but the true beauty of who he is transcends labels.

The Art of Adapting is available from Amazon or your local independent bookstore.

Share on FacebookShare on TwitterShare on Linkedin
Cassandra Dunn

Cassandra Dunn is the author of The Art of Adapting (Touchstone/Simon & Schuster). She’s published a dozen short stories in various literary journals, writes articles for several online publications, and enjoys working with authors as a freelance editor.

Neurodiversity in the Arts: Cassandra Dunn’s “Art of Adapting”

I’m back to recommend another work of fiction featuring a neurodiverse character. This time it’s The Art of Adapting, a first novel by Bay Area author Cassandra Dunn. This story proves that although Leo Tolstoy was a genius, he got one thing wrong: all happy families are not alike.

Broken Chains, Ended Pains: The Importance of Neuroplasticity and An Open Mind

Deborahmichelle Sanders, J.D. recounts how neuroplasticity allowed her brain to recover from a health crisis, and how the medical community can benefit from being more open-minded.