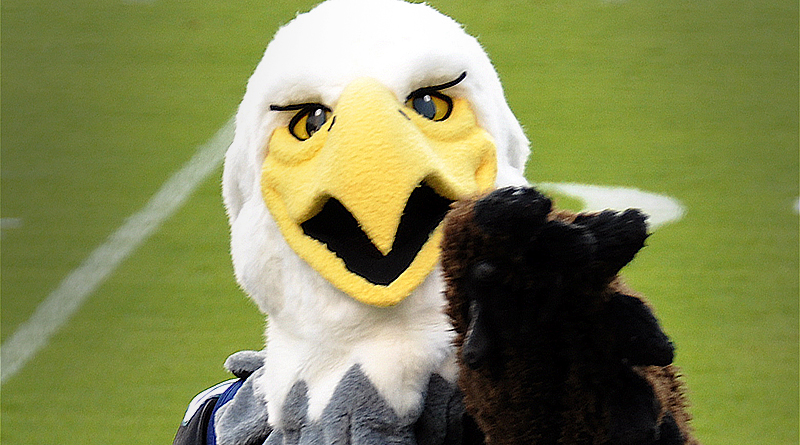 Joshua Eryou, a senior at East Lawrence High School, is like many people with autism: shy, quiet and reserved. But when he becomes the school’s eagle mascot, he comes out of his shell, dancing in the stands and interacting with fans.

His mother Danielle can’t believe the transformation. “Every mother thinks her child will do great things. But I never thought he would be the mascot. He has amazed me,” she said. “Officially, no one is supposed to know who is in the suit. I can’t help but think, though, that there are children with autism, and if they only knew who was in the suit, they would be encouraged. And so would their parents.”

Joshua originally had the idea as a freshman, when his stepbrother was the mascot and he served as his bodyguard. As Joshua saw the other high schoolers and fans interact and have fun with the mascot, he decided he could do the same thing. Joshua explained, “I got tired of standing there, so I started dancing. I don’t dance outside of the suit, but I thought if I danced it would make people happy. I feel very happy that little kids come to Rocky [the mascot] and hug him and give him high fives and know he is friendly. I am very happy as Rocky.”

Danielle Eryou has always been concerned about raising her three sons with autism so that they could find a place in society, expressing a strong desire to “raise them right and help them build strong foundations” so they could make their way in the world.

Daniel Manchester, Joshua’s close friend, sees the effect the mascot has had on Joshua, saying “Josh and I are really good friends. What he has done is very inspirational. I’ve been taking sociology and one of the words we’ve learned is introvert. That’s what Josh is. But when he puts on the suit, something happens. I think being Rocky has made him more confident. It’s pretty cool what he does.”

East Lawrence’s final two home games are October 21 and 28, closing out Joshua’s career as Rocky the Eagle. His mother Danielle believes it has had a great impact on Joshua, stating “It gives a child who may be shy or may have a disability an outlet. It builds character.” She hopes that the confidence gained by Joshua within the suit will carry over to other parts of his life.

This piece is based on an article published by Decatur Daily, which can be found here.

Starting on March 14, 2018, in London, DYSPLA will be hosting a unique experience which blends and blurs the lines between traditional film festivals and the art gallery experience.