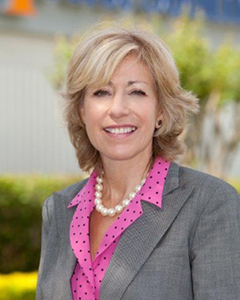 With over 30 years of experience as a high-level bank executive, Lynne Wines has paved the way for professional women across our community. Currently, Lynne serves as a director and member of the audit and risk committee of BankUnited, a $30 Billion commercial bank with over 100 branches. Most recently, Lynne spent a year at Harvard University as an Advanced Leadership Fellow, studying social entrepreneurship and developing a project on financial literacy and micro finance.  She is currently enrolled in a Master’s of Public Administration programs at NYU.  Before her year at Harvard, Lynne worked with the Seminole Tribe of Florida leading their effort to acquire a financial institution.

Prior to that, she served as the President/CEO of First Southern Bank, headquartered in Florida. Lynne truly worked her way through the ranks of the banking industry, beginning her career as a teller, then a bank comptroller, and on to chief financial officer and chief operating officer before becoming CEO at Union Bank of Florida in 1999. Following the acquisition of Union Bank by Colonial Bank, Wines headed Colonial’s South Florida operations. Subsequently, she became President of CNLBank and CEO of First Southern Bank.

Lynne currently serves on the boards of 211 First Call for Help, Different Brains Inc. and was recently appointed by the Chief Justice of the Florida Supreme Court to the Florida Commission on Access to Civil Justice Business Council. She has been actively involved with United Way of Broward County for more than 20 years. She has served on United Way’s Board of Directors and was Chair in 2010-12. She recently served as Chairman of 2-1-1 Broward, and has served as a member of the Board of Directors for WPBT Public Television Channel 2, Broward Women’s Alliance and Senior Volunteer Services, American Heart Association, March of Dimes, Council for Educational Change and Work-Life Balance Institute.

Her professional affiliations include a four-year term on the board of directors for the Florida Bankers Association. She is a frequent guest Lecturer for Florida Atlantic University’s Executive MBA program. Among the many prestigious awards presented to her are the South Florida Business Journal Diamond CEO Award; Commercial Real Estate Women’s (CREW) Women at the Top Honoree; Women of Distinction Award; South Florida Business Journal’s Business Woman of the Year; and U.S. Banker magazine’s “25 Most Powerful Women to Watch.” Lynne holds a Bachelor of Science degree from Nova Southeastern University and is currently enrolled in a Master’s of Public Administration program at NYU. She has one son, Shawn, who resides in Los Angeles.