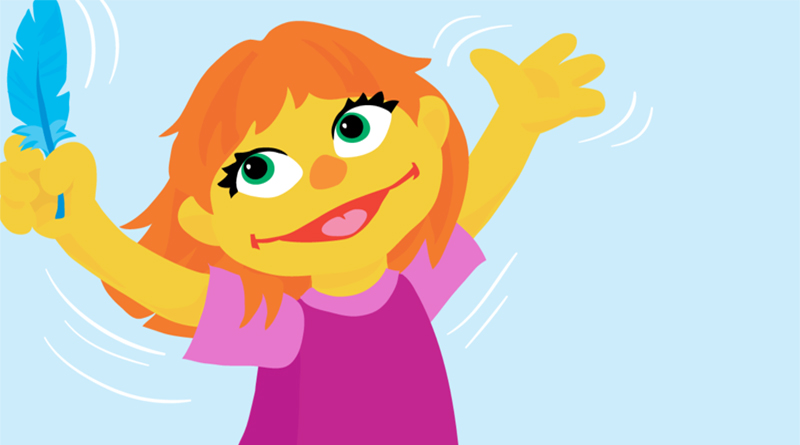 Sesame Street has become the latest television show to introduce a character with autism.

The storyline involving Julia, aimed at families with children ages 2 to 5, aims to reduce the stigma of autism by “bringing forth what all children share in common, not their differences,” said Dr. Jeanette Betancourt, senior vice president of U.S. social impact at Sesame Workshop

“Children with autism share in the joy of playing and loving and being friends and being part of a group,” Betancourt said. When we explain from a child’s POV that there are certain behaviors, such as slapping their hands or making noises, to express excitement or unhappiness, it helps younger children to understand how to interact with their autistic peers.”

The online initiative includes a free downloadable app that incorporates videos, digital story cards and virtual storybooks designed to make everyday stressful situations such as going to bed, brushing teeth and crossing the street easier for families of children with autism, as well as caregivers. “Families with autistic children tend to gravitate toward digital content,” said Sherrie Westin, executive vice president of global impacts and philanthropy at Sesame Workshop. In the storybooks, Julia explains to her Sesame Street friends how she likes to play differently from them. “If you’re five years old, and see another kid not making eye contact with you, you may think that child doesn’t want to play with you,” says Westin. “But that’s not the case.”

On the Sesame Street website, Leslie Kimmerman, the story’s author, writes, “More than 20 years ago, my beautiful son received the diagnosis of autism, and my world changed instantly and profoundly. I knew nothing about autism, and it seemed that those around me — even the professionals — didn’t know much either. Today, happily, that has changed.”

Perhaps the best-known autistic character is Sheldon Cooper in The Big Bang Theory. It is strongly hinted that he suffers from this disorder due to his many symptoms, such as social awkwardness, compulsive rituals, and rigidity against many changes in his life. Other autistic television characters include Gary Bell on the SyFy series Alphas; Dr. House, from the series of the same name; Jake Bohn, the main character on the FOX show Touch; Detective Sonya Cross on The Bridge; Temperance “Bones” Brennan and Zach from Bones; the recurring character on the show Boston Legal, Jerry Espensen, who was nicknamed “Hands” due to his lack of hand gestures and frequently resting them on his body as his walks; Dr. Eugene Porter from AMC’s The Walking Dead; Dr. Maura Isles from Rizzoli and Isles; the autistic physician Rebecca Blithely of Strange Empire; and Tommy Westphall, the autistic son of Dr. Westphall on the 1982-1988 show St. Elsewhere.

Television characters with Asperger’s include the journalist Abed Nadir from the show Community; Virginia Dixon, a visiting doctor on Season 5 of Grey’s Anatomy; the parallel universe version of Astrid Farnsworth on Fringe; Bob Melnikov from ReGenesis; Max Braverman, on Parenthood, is first a child and then a teenager with Asperger’s; and Sugar Motta from Glee, although the character is regarded as a highly offensive stereotype by the autistic community.

At the recent “DC in DC” event, writer Tom King stated in a panel that the DC universe will now have a place where superheroes can deal with PTSD.

Colorado teenager's film "After War," tells the story of his father's PTSD, and the impacts it had on family life.

For one veteran with PTSD, performing stand-up is the pressure valve

Adapted by Peter Bochner When Jeremy Cessna returned home after serving as a U.S. Army…