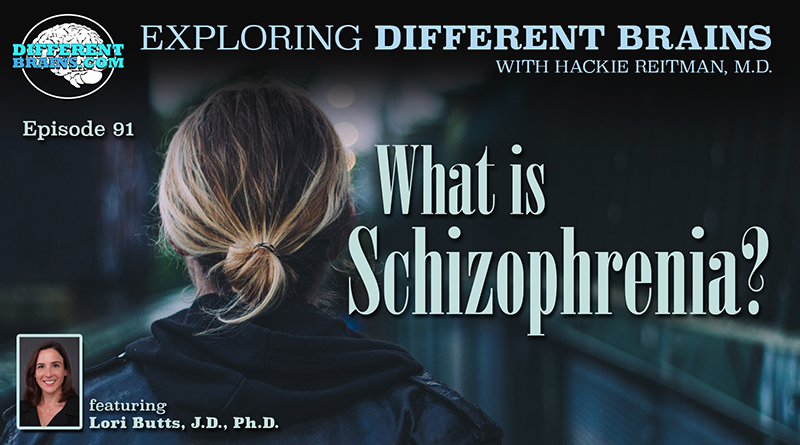 (11 mins) In this episode, Harold Reitman, M.D. speaks with Lori Butts, J.D., Ph.D., the president and director of the Clinical & Forensic Institute, and previous president of the Florida Psychological Association, about Schizophrenia. Dr. Butts discusses what Schizophrenia is, what common treatments are, and demystifies common stereotypes about people with the condition.

HACKIE REITMAN, M.D. (HR): Hi, I’m Dr. Hackie Reitman, welcome to another episode of Exploring Different Brains. Today, we’re going to be discussing schizophrenia and we’ve brought to discuss it with it no other then my friend, Dr. Lori Butts. The outgoing President of the Florida Psychological Association and the head of the Clinical and Forensic Institute. She has not only a psychology degree but also a law degree. Lori, welcome.

HR: Well, you’re a great person. You’re easy to intro. What is schizophrenia? Let’s pretend I don’t know anything, which is not far from the truth, about schizophrenia. What is it?

LB: So schizophrenia is a psychotic disorder, so it’s a break from reality. It can be somebody that’s having hallucinations, hearing voices, seeing things that aren’t there or somebody that has delusions. Believing facts that are not real. So the easiest way for me to describe it is a break from reality, somebody who’s processing information that is not in alignment with what is going on in reality.

HR: So if someone has schizophrenia, first of all, how do they get diagnosed?

LB: So typically we don’t see schizophrenia until late teens, early 20s. They typically get diagnosed because some family member or somebody notices that there’s something going on. It’s more common that somebody on the outside sees a change in somebody rather than the person say, you know, experiencing these things and complaining about it. They get diagnosed sometimes unfortunately and like the first psychotic break it’s called where somebody starts hearing voices, has delusions and is having a behavioral problem as a result of those and becomes apparent to whether be police officers, doctors, you know, somebody a physician treating them or to family members.

HR: Is it genetic or environmental or what is it?

HR: Is it a constant thing or an intermittent thing?

HR: Does schizophrenia mainly occur isolated or is in conjunction with other neurodiversity in comorbidities.

LB: There are some comorbidities such as depression or anxiety, there’s another diagnosis called schizoaffective disorder. So, in addition to the thought problem, which is schizophrenia, the problems with thinking, there’s an affective component like a bipolar disorder component where the symptoms track when the person is having depression or mania. So schizoaffective disorder has both an affective and a cognitive component to it.

HR: And so once it’s diagnosed, how is it treated?

LB: Schizophrenia is treated with psychotropic medications. There are psychiatry has been developing these medications for many years and they’ve gotten pretty good but there’s still people, it’s still a trial-and-error type of treatment where patients have to try medications for a period of time to see if it helps that person. We don’t yet we’re not advanced enough to where we know this type of person will respond to this type of medication, unfortunately. So, what happens is when a person gets a diagnosed with schizophrenia, they get tried on certain medications to see what medications will work and unfortunately sometimes they don’t work the same way throughout somebody’s life, so that may change as a person ages matures. Different things happen in their lives so it’s a chronic situation where there needs to be a lot of psychiatric intervention. That does how it’s, you know, treated for the most part, but that’s how the symptoms are treated, but somebody with schizophrenia tends to need support around them. So there’s case management, there’s group therapy type of situations, there’s assistance with people needing vocational training or things like that to try and help support them manage their psychiatric condition and also be productive.

HR Is there a role for the psychologist in a big way with people with this disorder?

LB: Absolutely. So the people that do the best with managing schizophrenia have a strong support system. A psychologist would be a very large piece in that support system and also getting the family involved to support the person with the schizophrenia. It can be a very frightening diagnosis, it can be nerving, it could be very misunderstood by family members because of somebody’s not, if somebody’s having a break from reality, they may be paranoid or suspicious of people in their lives and that turns family members off. They think that they’re being a jerk or they’re being disrespectful and so the psychologist can provide a strong educational and supportive component for family members and people that are diagnosed with schizophrenia.

HR: What’s the incidence of schizophrenia?

HR: Schizophrenia is one person.

HR: What would you say is the most common thing that people like me do not understand about this disorder that we call schizophrenia.

LB: I think people assume that if somebody has schizophrenia, they’re going to be violent. I think that they assume that somebody with schizophrenia is going to be aggressive and that’s not so. People with schizophrenia tend to be more quiet, more introverted, they want to pretend that their symptoms don’t exist, they aren’t necessarily broadcasting to other people that they’re hearing voices or they’re seeing things because they want to be perceived as normal and so it’s difficult for them to reach out and acknowledge that this is going on with them so they tend to isolate as opposed to acting out on other people or things like that.

HR: Lori, if someone has one psychotic break, does that mean that they are schizophrenic?

LB: No, it does not. Schizophrenia is a pervasive. It’s longer than one psychotic break. I believe the diagnostic criteria is six months. So there can be brief psychotic episodes that and the person never has a psychosis ever again. So schizophrenia is a longer pattern of being psychotic.

HR: If our audience wants to get in touch with you, how do they do that?

LB: They can look me up at the Clinical and Forensic Institute. It’s our website CFIexperts.com.

HR: Well, we’ve been talking with my friend, Dr. Lori Butts all about schizophrenia, today. Here at Different Brains. Lori, it’s been a pleasure to have you, thank you for coming.

LB: Thank you for having me.

The Power of Different: Appreciating the Talent in Neurodiversity, with Dr. Gail Saltz | EDB 79

(21 minutes) In this episode, Hackie Reitman, M.D. speaks with Dr. Gail Saltz, a columnist, bestselling author, podcast host, television commentator, and one of the nation’s foremost go-to experts on a variety of psychological and mental health issues. Her newest book is The Power of Different.

(VIDEO - 3 min 16 sec) In this episode: a program makes theater more accessible for kids with autism, community members rappel from 100 feet for dyslexia funds, and more!

Employment for the Uniquely Abled, with Ivan Rosenberg | EDB 158

(27 minutes) In this episode, Dr. Hackie Reitman speaks with Ivan Rosenberg, Founder and President of The Uniquely Abled Project.