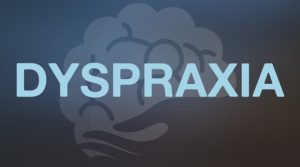 Dyspraxia is a brain-based motor disorder that affects physical coordination and causes children to perform less well than expected in daily activities.

There is controversy whether dyspraxia and developmental coordination disorder (DCD) are the same thing or their own entities, as some medical professionals use these terms interchangeably and others consider them different due to the lack of a formal definition.

Dyspraxia is thought to be three to four times more common in boys than in girls and it sometimes runs in families.

Direct causes for dyspraxia are unknown, but correlations have been identified, such as being born prematurely and or with a low birth weight, if it runs in the family, and if the mother was drinking or doing drugs while pregnant.

Although signs of dyspraxia are present from an early age, children and adults vary widely in their rate of development.

Children and adults with dyspraxia may be impaired in the following areas:

There is no cure for dyspraxia, but physical and occupational therapy as well as doing sports or activities can help in managing symptoms. Other types of therapists and healthcare professionals that may help are behavior analysts. Pediatric specialists, psychologists, and speech-language therapists.

Local Dyspraxia Groups in the UK

University of Maryland Resources for Dyspraxia