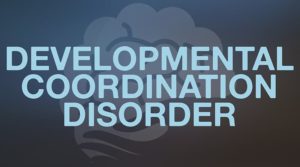 What is Developmental Coordination Disorder?

Developmental Coordination Disorder (DCD) is both a learning and physical disability. It is a form of dyspraxia, which is a neurological disorder that results in life-long impaired cognitive skills, such as poor motor memory, judgement, and processing abilities.

With less than 200,000 U.S. diagnoses per year, DCD is often overlooked, as people with it are often just considered to be abnormally clumsy. Also called, “Clumsy Kid Syndrome,” Developmental Coordination Disorder is characterized by miscommunication between one’s mind trying to tell their body to perform certain tasks, but having difficulty doing so. The brain will tell the body to do something, and the brain knows how to perform the function, but it has difficulties giving the body proper instructions on how to perform the task, no matter how simple it is. Kids with DCD often have a normal intelligence, but because they cannot perform simple, everyday tasks, they are viewed by others as slow, incapable, and even mentally challenged.

What Causes Developmental Coordination Disorder, and what are the Symptoms?

Not much is known about the cause, but researchers believe it is the result of delayed brain development (or in my case, brain damaged caused during infancy.) DCD can occur alongside other disorders, but there is no correlation between an additional disorder causing it. However, children that are born prematurely or with a low birth weight are at a higher risk of developing Developmental Coordination Disorder.

Signs and symptoms of DCD, such as having trouble crawling and learning ow to suck and swallow milk can appear soon after birth. As kids enter school, signs and symptoms of DCD such as having a lack of motor skills, bilateral proprioception (knowing where one’s body is in relation to where objects are), and frequently bumping into or tripping over things, a lack of depth perception, poor muscle tone, and difficulties performing activities such as writing, coloring, or using scissors, all become more noticeable. Some kids may retain primitive reflexes, such as the babinski reflex (fanning of the toes when the bottom of one’s feet is touched) that are normally gone within eight months of birth as well. Because there is also a developmental delay with DCD, kids may have difficulties learning, as their brains are not equipped to handle a lot of instructions and information at once.

How is Developmental Coordination Disorder Diagnosed and Treated?

To meet the criteria for being diagnosed with Developmental Coordination Disorder under the DSM-V, one must…

Developmental Coordination Disorder is a life-long condition. However, it can be improved with education, social skills training, and physical and occupational therapy. Physical therapy helps one’s brain and body to better communicate with each other and occupational therapy helps one master those daunting daily tasks. The following sports and activities can really make a difference for kids with DCD: martial arts, swimming, and dance. All of the above help improve balance, coordination, motor skills, and strength.