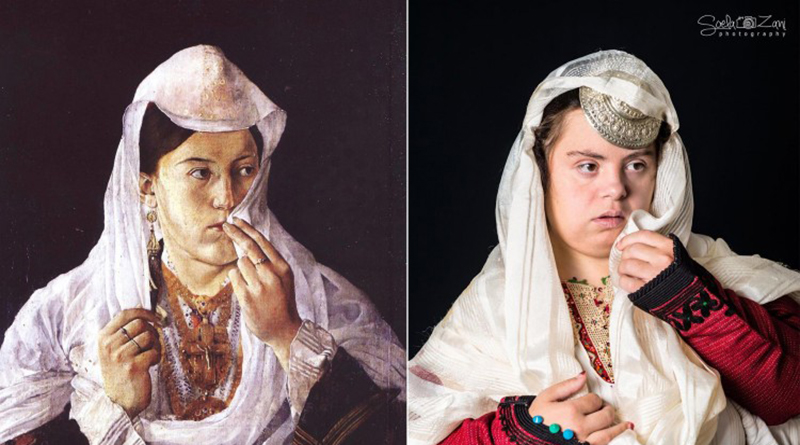 “When the exhibit opened, I saw many people crying in front of the pictures,” says Soela Zani, the photographer behind the images.

As reported in the December 14 issue of PEOPLE Magazine by reporter Cathy Free, in November Zani, a family portrait photographer who lives in Albania, opened an exhibition at Albania’s National Historical Museum of her images of 14 Albanian children with Down syndrome in classic poses from paintings such as Renoir’s “The Dancer,” Manet’s “The Fifer,” Gaugin’s “Mr. LouLou” and Magrite’s “The Son of Man,” among others. According to Zani, Zaimi asked her to take some pictures of Arbi and her family. “And I was so impressed by how strong they were.” In some parts of Albania, says Zaimi, having a child with Down syndrome is still thought to be unlucky or shameful. “They are considered not being able to do a thing in life,” she says. “But Soela has figured out the beauty of our children, inside and out.”

Said Zani, “There is no difference between a child with Down syndrome and a child without it. They are the same because they are children. We need to accept them as they are and give them possibilities to succeed in life.” According to Enerjeta Xhaferi, whose daughter, Vanessa, 10, put on costumes to duplicate poses in two paintings, [Zaimi] “shows that kids with Down syndrome can do anything, and I thank her with all my heart for making me proud of my daughter.”

A 2016 calendar has now been created with the photographs to raise funds for Down syndrome causes, and Zani hopes to one day snap more portraits and publish a book.

This story was based on a piece published by People, which can be seen here.

7 Signs of Alzheimer’s to Watch Out For

Are you worried your problems with memory may be more serious? We take a look at 7 early symptoms of Alzheimer's disease.