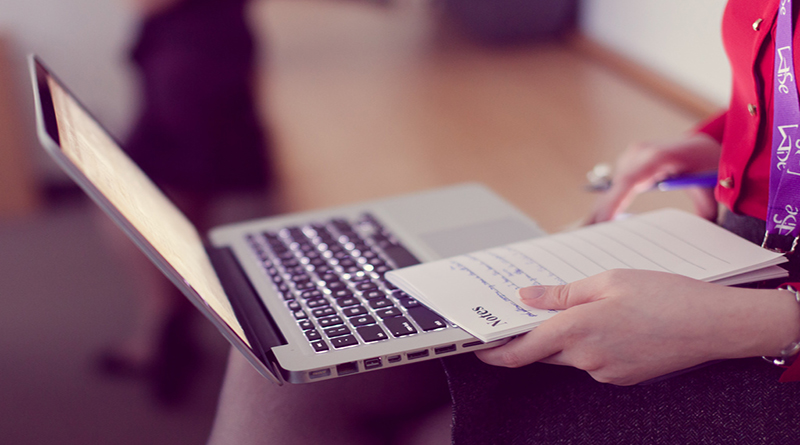 I recently listened to a webinar titled Engaging the Rewired Brain, in which presenter Dr. David A. Sousa discussed how computer technology is affecting the way students learn. As the father of a 14-year-old high school freshman girl whose school provides her with an Apple Macbook, I can verify that the learning process is quite different for students today than it was back when I was in high school in North Arlington, N.J.

One of the things that Dr. Sousa discussed is the effect of more and more students taking notes on portable digital devices versus writing notes in longhand on paper. He said that studies consistently show that students who take notes in longhand display a greater conceptual understanding of the material (when they’re tested on it), are more successful at integrating new material with what they already know (in educational terms, transfer), are better at applying their new understanding, and retain more of the newly learning material.

Why? Dr. Sousa theorized that because a note-taker can’t write as fast as a presenter or teacher talks, their brain has to listen to several phrases and sentences, then decide how to process that information and jot down a summary of it in the note-taker’s own words. Taking in a presentation in this manner enhances understanding and retention.

For a student who types their notes machine-gun style, there’s little mental processing involved. The material comes in through the eyes and ears and goes out the fingers into the laptop. Rat-a-tat-tat. The laptop becomes the memory rather than the brain. As Dr. Sousa observes, “Technology may be faster but that doesn’t mean students will learn more.”

Although I’m someone who prefers to input notes by keyboard rather than longhand (I’ll soon explain why), I can see Dr. Sousa’s point. I can understand why some educators have banned technology-enabled note-taking from their classrooms, because laptops provide so many opportunities for distraction. And I can get the theory behind a study published last year in Psychological Science, a journal of the Association for Psychological Science, which concluded that “laptop note takers’ tendency to transcribe lectures verbatim rather than processing information and reframing it in their own words is detrimental to learning.”
The lead author of the study, psychological scientist Pam Mueller of Princeton University, lead author of the study, decided to investigate the question because after she switched from laptop to pen and paper as a graduate teaching assistant, she felt she got more out of the lecture. Her co-author, with psychology researcher Daniel Oppenheimer, had a similar experience when taking notes on a computer at a faculty meeting. Although Mueller says she doubts that students will switch back to paper notebooks, she says that new stylus technologies “may be the way to go to have an electronic record of one’s notes, while also having the benefit of being forced to process information as it comes in, rather than mindlessly transcribing it.”

Now let me confess – I’m been one of those “mindless transcribers” during much of my career as a journalist, and have leveraged my 100+-wpm typing skills to transcribe everything from one-on-one interviews, online press conferences and webinars. For me, there was no contest between trying to read my barely decipherable hand-written notes, scrunched into a tiny reporter’s notebook, vs. transcribing an interview on a laptop. Now I agree with Dr. Sousa that by doing this I may have missed seeing the forest for the trees, that I was typing so fast I was essentially entering in words rather than absorbing the gist of the presentation.

But on the other hand, no one ever complained about being misquoted when I did a story on them.

Darlene Lancer, JD, LMFT discusses the pros and cons of the CRAFT method of helping a loved one with addiction issues get help.