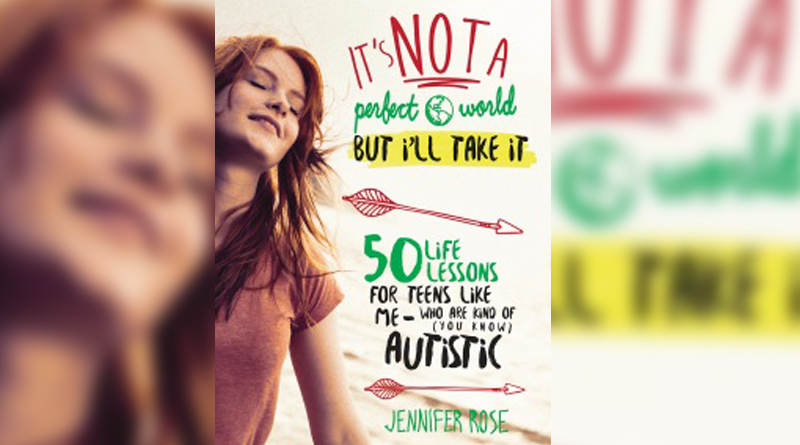 Even if that teen is autistic.

Jennifer Rose, the author of It’s Not a Perfect World, but I’ll Take It: 50 Life Lessons for Teens Like Me Who Are Kind of (You Know) Autistic, is a teen worth listening to.

Rose approaches all these situations with a positive attitude:   She talks about how far she’s come with communication skills and with learning to control emotional outbursts.   She has a lot of good things to say about her parents, too, including, “Mom and Dad have one of the best marriages of the twenty-first century.” (From the book it sounds as though she’s right.)

At the same time she’s realistic about the effects of the autism epidemic (the causes of which remain unclear):   In Lesson #25, “Celebrate autistic kids without celebrating autism,” she writes, “Sometimes the media likes to showcase autistic kids who have special talents, but we can’t forget about the autistic kids who aren’t so gifted.” People like Stephen Wiltshire and Kim Peek (the model for Dustin Hoffman’s character in Rain Man) are the exception. “When we celebrate the achievements of Franklin D. Roosevelt, we celebrate the great things he did despite having polio. We don’t celebrate polio itself.”

The traits that we associate with autism—narrow interests, hyper-sensitivity—are here, fully acknowledged and understood by Rose herself, who demonstrates remarkable insight into herself for a person of any age.   But ultimately, the book isn’t about autism; it’s about being a teenager.   Yes, part of the audience for this book will be parents who want to look into the hearts and minds of their teenage daughters without having to be in the same room with them.   But the real audience are the teens a few years younger than she.   As more kids on the spectrum are being mainstreamed, it isn’t just they who have to deal with neuro-typical kids: The neuro-typical kids have to deal with them.   If some of those neuro-typical kids, reading Rose’s book, discover that their peers on the spectrum are more like than unlike them, the book will have served its purpose, whether or not it makes it easier to say no to a friend.

Amalia Starr discusses the importance of supporting parents of children with autism, and shares lesson she learned from her own son.

There’s No Place Like Home: For Adults With Autism & Other Special Abilities

Written from a mother’s heart, pondering his first home away from our family home, here’s what I believe Matt wants and says through his words unspoken.