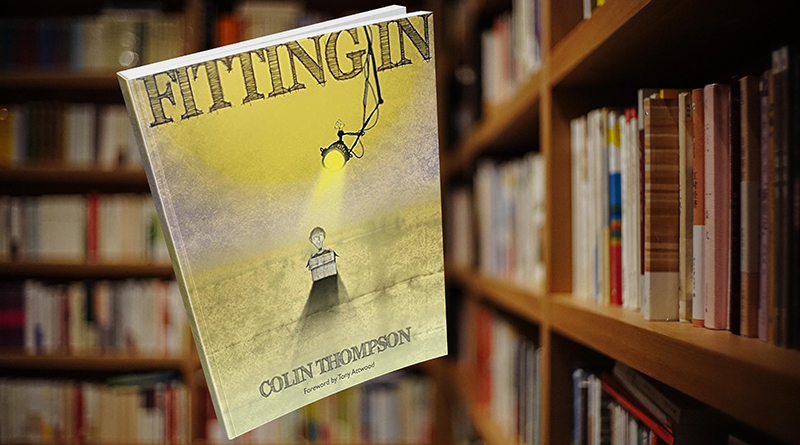 How to Not Fit In but Not Care

A few years ago my then-high-school-aged daughter asked me to buy her a laptop skin: It was an intricate drawing of bookshelves, featuring titles such as War and Peas and The Seven Pills of Wisdom.

When I saw it, I asked her if she’d mind if I bought one for my own laptop. But all things come to those who wait. I have my own copy now, because the same design is printed inside the covers of Colin Thompson’s new memoir, Fitting In. He didn’t have to ask anyone’s permission to use it, either, because he’s the artist.

Which means that I was a fan of Colin Thompson before I knew who he was.

Who he is: the fascinating and talented author-illustrator of over 50 books, including Ethel the Chicken, and Looking for Atlantis.

Fitting In is heavily illustrated by the author, and these drawings, like the laptop skin that first attracted my eye, are mesmerizingly intricate, demanding repeated and lengthy study. Add that Thompson is red-green color blind and they become even more mind-blowing.
Reading about Thompson’s life, however, might be more fun than living it was. He was born Colin Willment, but his mother changed his name when she remarried. “She proved to be a rubbish judge of character” is how he sums up his feelings toward his stepfather. By the time Colin was 25, he had married and divorced, fathered a daughter, and spent a lot of time in mental institutions diagnosed with manic-depression (then the name for bi-polar disorder).

In subsequent years he worked as a weaver, a potter, and a ceramicist. He had a stint as a stage manager at a third rate theater where he didn’t perform but still caught the show biz bug: “There was something so addictive about the whole thing … going out to entertain people who expected so little they would love you no matter what you did.” The stint ended when he tipped into another depressive episode.

Since falling in love at first sight is yet another of his many talents, these years were hardly all bad. But it was when he was fifty that his prospects really looked up: He published Ethel the Chicken, the children’s picture book that was the first of his long career, and indirectly that led to his meeting his third, ‘til-death-do-them-part wife.

Thompson himself might say that since he’s 73, the ‘til-death-do-them-part-part is more or less a given. Such an observation would mesh with the wry and clever tone of his writing. Here’s how he traces the history of hair in his lifetime: “My generation became wet and weak. They grew their hair even longer, but they wove flowers into it, and turned into feeble watery middle-class protesters called Donovan.”

Childhood summer vacations at Frinton-on-Sea: “My cat Tigger came with us one year and showed his devotion in a way that only cats can. He scratched my legs and ran away. We found him a week later, fat and content in a genteel tea shop full of cream cake. He celebrated his return to the bosom of our family by scratching my legs.” (“Frinton-on-Sea” is real; a good memoirist knows what to include.)

On contraception: “The rhythm method works, but it relies on self-control and mathematics and I’m not much good at either of them.”

Thompson may indeed not be good at self-control or mathematics but he’s brilliant at writing about the trials and triumphs of his own life. Fitting In could be even more accurately titled, I’ll Never Fit in and I Don’t Care but that would have required uncomfortably-small typeface in order to squeeze it onto the cover. Donna received a free copy of this book from Jessica Kingsley Publishers for this review.

Donna Levin’s latest novel, “There’s More Than One Way Home,” will be published by Chickadee Prince Books in the spring of 2017.

Darlene Lancer, JD, MFT offers tools for recognizing if someone is dating a narcissist.