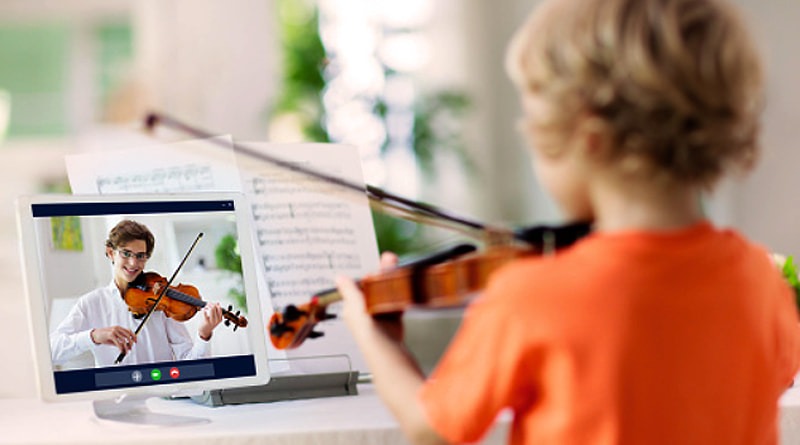 How Do You We Keep the Music Playing?

Prior to the Pandemic my methods of assessment and teaching were completely hands on and almost unlimited in their scope but now I found myself in the figurative ‘ ‘box’ or was I? How can I teach if students are not in my presence?

I soon came to understand that the journey was going to be different. I was going to have to navigate with no trodden path to follow. No directions and no compass. Just the sheer determination to keep the music playing.

Teaching music through a computer screen? How could this possibly be accomplished? I quickly learned about Zoom and Google Classroom and I was scared to heck!

I immediately ran out and bought (from a rapidly dwindling supply) a brand new Desktop PC with a large screen, additional speakers and a separate microphone.

I needed to be technologically  prepared but that was just the beginning of this ‘new normal’ for me and for my students, after all they too (while all were vastly more equipped and versed than I at person to person interaction with Face Time et al) now had to receive instruction in the all encompassing arena of sound and emotions through their computer screens.

This was completely new to them, as it was for me but being the Teacher I could not show any flaws or hesitancy, for that’s a luxury teachers do not have. This is especially true in times of crisis like leading students out of the building during an emergency.

More profoundly,  this was an emergency for students and teachers on a personal level let alone on an academic and artistic level. Many students were losing family members and many were now facing economic hardship as were many teachers. I know because I lost my Mother in early April and on almost all levels I was on equal footing with my students yet I had to step up.

I had to lead because for many students, school and especially music are two stable forces in their lives and they needed stability now more than ever.

As a person whose Brain didn’t, wouldn’t or couldn’t (and still can’t) easily follow traditional rules for learning I always made adjustments. I’ve made a career of learning how to detect students with ‘Different Brains’ and adjust my teaching but that was in person where you could see the body language of a student.

Some students might tap their fingers, foot or engage in some other self distracting practices, but what behaviors could I see except the expressions on their faces through a video monitor? Eureka!! I’ll get back to that in just a little while

During my 36 years of teaching experience I was certain that I had seen enough to handle just about any situation, but how does a fish swim without water? How could I teach burgeoning musicians with their Neurodiverse abilities when I could not see or hear them in person?

After all, how can I tell whether or not students were engaging in proper positioning of their fingers and hands? Things you can’t see when you see only a student’s face? Then it hit me like a ton of bricks!! I actually had the best vantage point to pick up on Neurodiverse needs because as the great song by The Eagles said so clearly! ‘You Can’t Hide Those Lyin’ Eyes!”

It was all right in front of me if I would only use the eyes and facial expressions of my students to pick up on any disconnection in their individual ‘Spiral Feedback Loops’ more keenly and consciously than ever before.

Allow me to elaborate just a bit on the Spiral Feedback Loop and those of us with Different Brains who use it more acutely than others.

My initial foray into researching the link between music and academic/socio-emotional well being brought me to Project Zero founded in 1967 by philosopher Nelson Goodman and the Spiral Feedback Loop by Dr. Art Costa.

Dr. Goodman was a professor at the Harvard Graduate School of Education. His Project Zero program started with an initial focus on understanding learning in and through the arts which was and still is of great interest to me.

Dr. Costa studied the Brain’s reaction to various environments in which people processed information based upon their actions.

In music such responses happen almost instantly because playing notes on an instrument provides instant feedback and it’s that instant feedback that I had to relearn  to use even before the student might be aware of.

I also learned that this new normal had other obstacles such as students having peripheral devices in which digital information was flying at them like Text messages etc. After all students need socialization and without the confines of a school building or me in their homes during private lessons, they lacked traditional structure.

In ordinary times I’m not a taskmaster of students. I’m their guide to music and have always had a welcoming and nurturing disposition as an educator and during these strenuous times for my students I was going to ignore their occasional distractions just as I did in person.

So, how has my Different Brain adjusted to ‘Keep The Music Playing’ during this unique period in our lifetime? I did what I always did and that was to work with what I had available and not what I wanted to have available. It’s the survival instinct people with Different Brains have. We don’t wait for someone else to figure it out for us. We figure it out for ourselves.

I decided that I was going to focus on their eyes and faces to gauge their thought process on how they were receiving information.

I realized I could now see any ensuing derailment from the music which is something I was always aware of but did not make full use of, after all it’s inappropriate to stand in front of a student and stare at their face in person while they are playing. Now you can’t help it!

Having a face to face vantage point also has allowed me to recognize and correct problems with embouchure formation which can effect tone much more rapidly than before.

The two most important takeaways for me during this new teaching and learning paradigm is that it has allowed me to be more of an emotional support for my students. I can spend more time speaking with them and cultivate their interpersonal skills than I can under normal conditions.

For my students with Different Brains I’ve discovered that they are now learning to use their gift of breaking down and reforming information without fear of others watching them.

Even in the darkest times these unique students are learning to grow and in ways that will have prepared them for what will undoubtedly be a hybrid model.

This identification and practice of what I am calling ‘ The Anticipatory Spiral Feedback Loop’ is  something that has not yet been explored using this theory but will prove extremely important. Teaching students to achieve in their endeavors (even when isolated from others) will be a huge factor in them acquiring independent learning skills.

Let’s all keep the music playing!!

Sample Letters To Your Child’s New Teacher- For Apraxia, Autism, Or Any Neurodiversity

If you have a child with a communication impairment you know you are probably their best translator. It’s frightening for both you and your child to be separated on those first days of school, but there are things you can do to make that transition easier.

Steve Gregory discusses lessons he has learned during his own recovery from an Acquired Brain Injury.

Hackie Reitman, M.D. discusses how one positive news story improved his mood, and looks at what the brain is doing when that happens.