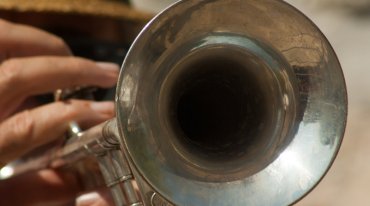 I haven’t met a brain yet that didn’t think extremely well when it comes to music. As a matter of fact I’ve never shared music with a brain that didn’t improve when music was shared with it. I use the word ‘share’ as opposed to ‘teach’ because all I’m doing is sharing the gift of music that was given to me. I was one of those kids that always seemed to be daydreaming and not paying attention, yet I was listening. Little did I know that I had the gift of what I call ‘mental verbal notation’ which is just like taking musical notation without writing it out but knowing what it is and being able to play it.

Interestingly enough I was always in the ‘advanced’ classes but I never knew what the heck the teacher was talking about. I realized that somehow I was hearing and reshaping information in a way that made sense to me.

This became evidently clear when in the 3rd grade, Mrs. Flynn was teaching the class what we used to call ‘Long Division.’ There I was, going through one example after the other when she said ‘Joseph you are not following the pattern but I see you have all the correct answers.’ Then she asked me to show her how I got the correct answers and I couldn’t. I could do them, but not show the process. Does that sound familiar?

Being the great teacher Mrs. Flynn was, she let me be me, which in our schools is now the exception and not the rule. If you don’t ‘fit’ the mold created by those who create the tests and ‘standards’ you are forced to squeeze your Brain into their mold or be considered a failure.

Before becoming a teacher I spent my entire career as a student surviving and thriving by reshaping the environment and information around me. Now, what does that have to do with music making your brain better? Well, I’ll tell you: it all started with rejection.

From as far back as I could remember, and whenever I heard music, my brain moved.

It saw patterns, colors, images and words. Words I didn’t yet know, but I saw them and could spell them before I knew what spelling was, and before I could write. When I was five years of age I saw my Musical Hero the Great Louis Armstrong on Television and from that moment on I knew I wanted and needed to play the Trumpet.

In the second grade a ‘music teacher’ came to each class to ‘audition’ kids for the newly forming PS72 Band. Well, this was my big chance, right? Wrong!! The ‘teacher’ who shall remain nameless asked me to move my fingers as if I were playing a Trumpet and I screamed to myself I’M IN!! As it were, I was OUT!! I failed the ‘audition’ and I was crushed!! “Didn’t he see what I saw when I heard music” I lamented to myself. Well, I had to wait five torturous years before I was given the opportunity to play trumpet in the sixth grade.

Four years later I played my first paid performance and one year later I was playing with the NYC All City High School Orchestra. A few months after that, I was a guest student performer with the New York Philharmonic Orchestra. That same year I officially began my career as a professional Musician.

I realized that there had to be a lot of kids just like me who needed music taught to them by someone who understood them. By someone that wouldn’t ask how traditionally intelligent or traditionally behaved they were and needed the power of music to expand their brains. I knew I had to become a Teacher.

As fate would have it my first assignment was working with special education students teaching of all things Global Studies. Music jobs were hard to come by and I minored in History so I did it, with the plan to start a Special Needs Music program. Five months later (after gathering and repairing broken Instruments in the school’s basement, and buying a few myself) we had our very own Instrumental Music program, but I knew my kids had brains like mine. They were good brains, but worked differently and teaching them from a typical method book wouldn’t do.

Some of my students were nearly non verbal and some had physical challenges.

Some couldn’t sit still or keep quiet for more then ten seconds. There was no method book that was tailored for my kids and their strengths. Notice I did not say ‘weaknesses’ I said ‘strengths.’ Teaching music (be it instrumental or Vocal) is not about making students into Musicians. It’s about tapping into and expanding brain capacity. In 1987 (less than two years after the program began) I co-founded the first Instrumental Music performance group in the history of NYC Public Schools comprised solely of students with special needs. Our name was ‘Class Act’ and they were!!

When I work with the students in my ‘Autism All Star Choir’ (many of whom are completely non verbal) absolutely love Music. They may not be able to verbalize the words, but their eyes and hearts are singing and their Brains are being nourished as is their emotional well being.

Advocate for your children. Ask the music teacher to work with your children, and especially with those who cannot negotiate an Instrument. Please explain to the teacher that Music is often the only discipline and art form that meets their unique brains and hearts.

Historically a diagnosis has been perceived as a broken part that needs fixing- and once identified that it could be fixed. But, we are not part that need fixing- we are people.

Autism awareness, what does this really mean? Logos, colors and symbols that represent autism awareness are prevalent during the month of April. People equate the symbols with the autism spectrum. However, being aware that autism exists and comprehending what the autism spectrum is composed of, the challenges faced by families, children and adults who live with autism 12 months out of the year is a totally different and pressing issue.