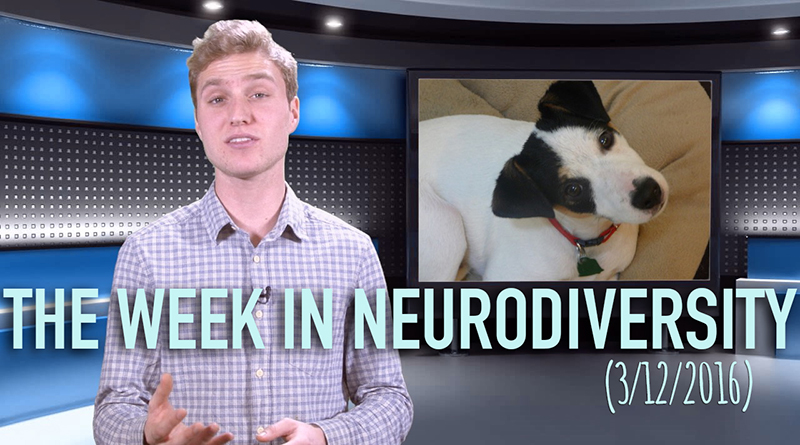 The Week in Neurodiversity highlights recent news stories that speak to the differences in our brains.

In this episode-
[00:09] Singing helps man with Tourette’s Syndrome
[00:35] New hospital program raises attention to the need of the hyper-sensitive
[01:01] Dogs with OCD?
[01:36] Teen with autism asked to the prom
[02:02] California governor with dyslexia raises awareness
[02:27] Brandi Chastain decides to donate her brain for concussion studies
[03:02] Video recommendation: Ask an Autistic

For more about neurodiversity, and for the longer videos on these stories click below:

Hi my name is Matthew Ryan, and welcome to The Week in Neurodiversity.

We’re going to begin today’s show with entertainment. College student Radlyn Naidoo is taking the internet by storm, becoming a singing sensation. More importantly, music has provided relief from the symptoms of his Tourette’s Syndrome.

“Singing is my escape mechanism to live a reality that I want to live, because it’s a reality where my Tourette’s is like non-existent to me.

In medicine and science, a new program called REACH, or “Respecting Each Awesome Child Here,” aims to eliminate the potentially overwhelming stimuli in the emergency room for those on the autism spectrum.

“We have our projector and our music and then we ask patients and families about what might be a trigger and a soother for the patient and we try to match that as best we can so we can avoid the triggers and provide the soothers.”

According to a new study, researchers have been sniffing around in dogs’ brains and have identified genetic pathways that affect canine compulsive disorder. Now, these discoveries can lead to better therapies in obsessive compulsive disorder for dog’s best friend.

“…and obsessive compulsive disorders also are often manifestations of a really healthy animal thing, which is keeping yourself clean and groomed. This tips into the territory of mental illness when you do things like compulsively over wash your hands or paws, or you develop a ritual that’s so extreme that you can’t sit down to a bowl of food unless you engage in the ritual.”

In community news, guess who’s going to the big dance this year? This guy! Because, a cheerleader asked him in class with a cookie cake. Check this heartwarming video out.

“What’s your question? Will you go to the prom with me? Yes! Yes!”

Lieutenant governor of California, Gavin Newsome, has dyslexia. He recently spoke with ABC news about his passion for raising awareness about this learning disorder.

“.and actually one of the first things I did as mayor, the first public events, was visiting kids with dyslexia in a school, and everyone was shocked to know that I had this learning disability, which, if I look back, was probably the best thing that’s ever happened to me.”

And finally, I went to the DMV today, and I’m not the only person who signed up to be an organ donor, because in sports, Brandy Chastain, whose iconic celebration at the 1999 Women’s World Cup, became a lasting symbol of success in power women’s sports, announced Thursday that she has decided to donate her brain to science for concussion studies.

“…Chastain would say in a phone interview with USA Today Sports quote ‘hopefully, what can be learned is can doctors and scientists and neuroscientists look at the brain of someone like me, who has been playing soccer a majority of my life, and really dissect the brain and say here’s where we see it beginning.'”

Who are you following? Because if you’re not following Ask an Autistic, you may be missing out. Check out her link at the end of this video.

And that’s it for the Week in Neurodiversity. Thanks for watching, don’t forget to subscribe and leave your comments. You keep advocating, we’ll keep bringing the news.

(23 mins) In this episode, Hackie Reitman, M.D. speaks with Dr. Jennifer Jo Brout, one of the world’s authorities on the misunderstood condition known as Misophonia.

(VIDEO - 5 mins) In this episode of ADHD Power Tools, Ali and Brooke discuss the importance of exercise.

(VIDEO - 3 min 36 sec) In this episode: a boy with cerebral palsy puts together an elaborate Halloween costume, a man dons a kilt to raise money for ALS research, and more!