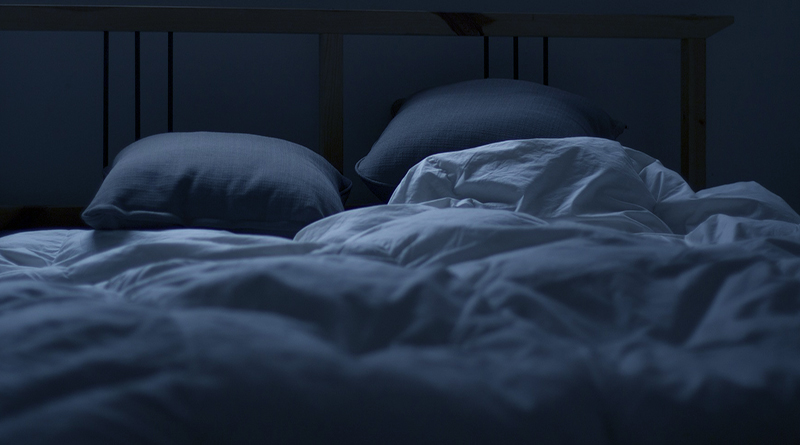 It began 22 years ago when I was just eight years old.

My earliest memory of having what would be the first of many sleepless nights, was at a birthday sleepover party. I can remember it as though it was yesterday.

The candles had been lit, the song had been sung, the cake had been cut. Shortly after the excitement of presents and a My Little Pony piñata, 12 little girls lay fast asleep in their sleeping bags; except for one little girl, me.

I remember laying in my sleeping bag, thinking to myself “why can’t I just fall asleep like everyone else?” That night I stayed awake staring at the ceiling until the next morning when my parents arrived to pick me up. Nobody was the wiser, and I kept it to myself.

Fast-forward 10 years later to my senior year of high school. My insomnia became a waking nightmare. I was lucky if I was able to get an hour’s rest before I was to be up at 7 am each morning. However, I was still able to focus in school and get by with my studies.

By this time, I had become aware of the fact that insomnia ran in my extended family, and I figured that it would be something I would have to live with for the rest of my life. However, I continued to refrain from telling my family about the struggle I was facing at the time.

It wasn’t until my first year of college that my insomnia became truly debilitating. I was unable to focus on anything, and as my patience dwindled, my irritability skyrocketed.

Finally, I opened up to my parents about my ongoing insomnia. They were both amazing pillars of strength and tried to help me in any way that they could. Naturally, this resulted in a trip to my primary physician. I was continuously being put on prescription sleeping pills, as well as anxiety medications. Time after time, each drug would inevitably fail in helping me fall sleep.

My mother then took matters into her own hands. She researched every holistic approach to insomnia that she could find. If there was an herbal remedy, I tried it. There were mixtures of valerian root and chamomile tea; blends of lavender oil and orange blossom. My pillow’s scent was a cornucopia of exotic fragrances, some of which I would like to think helped achieve some much-needed rest and relaxation.

I dabbled with drops of liquid melatonin, as well as tryptophan tablets. Liquid melatonin provided the best results for awhile; however, I seemed to become immune to its effects after a few weeks.

A few years later, while I was taking a nutrition class in college, we started to explore the positive relationship between exercise and sleep. I was intrigued by the information. I started to attend spin cycle classes regularly. I began to see immediate results. My mind was more clear, and although I was not getting a full night’s sleep, there was a significant increase in the overall amount of sleep I was getting.

I started to research guided meditation, believing that the mind needed to be exercised just as much as the body, if not more.

The positive effects that guided meditation had on my mental state were overwhelming. I believe that meditation is possibly one of the most powerful tools that we have to combat mental stress.

It allows your mind to focus on numbers, which effectively helps you block any thoughts that may interfere with your sleep.

Although I continue to struggle with insomnia, I take comfort in knowing that each day presents the opportunity to combat sleeplessness in new ways. There are many methods to relieve insomnia, but the success rates for each method may vary based on the individual. For this I am thankful, and continue to remain optimistic that those afflicted with insomnia like me can get the much-deserved sleep they need.

Honoring Your Limitations After a Traumatic Brain Injury

David Grant discusses adjusting to his new limitations after a traumatic brain injury. "Akin to learning to drive a new car, I am slowly learning how to navigate through life with my new limitations."

Oh, The Things You Can Think! Working Together for People with Autism

Denise Resnik discusses the importance of creating supportive environments for people on the autism spectrum.