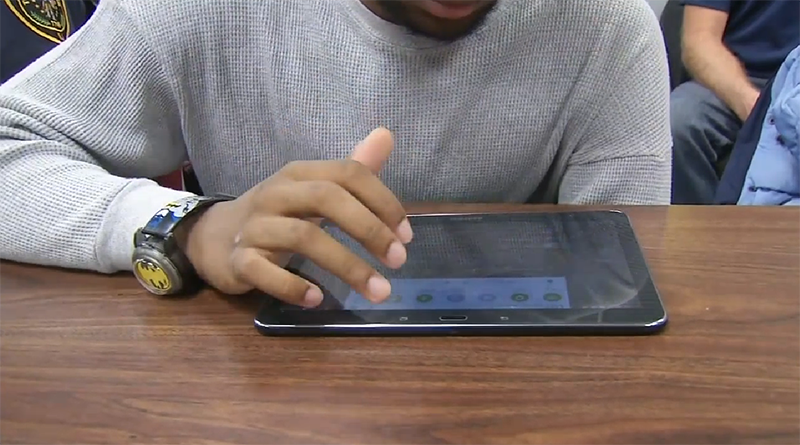 Sometimes frustrations in communicating their thoughts and feelings make kids with autism do things like run away from home.

When a 16-year-old boy who has autism and is non-verbal ran away from home this fall for the second time, the responding police officer who helped find him decided to try to prevent it from happening again. So Officer Richard Hartnett, an 11-year-old veteran of the Franklin Township Police Department in New Jersey, asked the boy’s mother if there was anything special she needed or anything he could do to help prevent the boy, named Zion Westbrook, from running away again.

Zion’s mother, Zimora Miller, explained that her son was frustrated that he couldn’t express his thoughts and feelings to her. Although Zion had a tablet at school with an app for helping non-verbal kids communicate, he wasn’t allowed to bring it home. And as a single mother raising two kids, Zimora couldn’t afford to buy one herself.

Hartnett spent the next few weeks working his contacts to try to get the special communication device, and finally got in touch with Jim O’Neill, the owner of local electronics company Electronic Enterprise. O’Neill donated an Android tablet worth $300. Next, the local PBA covered the costs of the special communication application and a cover for the tablet, worth another $300.

Zion received his new tablet at the end of November. According to his mother, Zion “has not put the tablet down” since he got it and he has had an easier time expressing himself, because he can text whatever he wants by using symbols.

In a news release, the Franklin Township police chief, Lawrence W. Roberts, said, “Police work is not just about enforcing the laws, it’s about helping people. Officer Hartnett went above and beyond to help this family.”