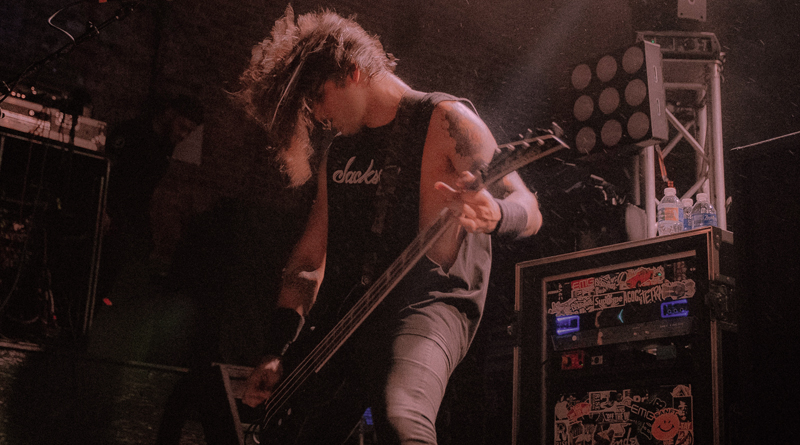 Comedian/Metal enthusiast Brian Posehn once said, “Metal is the feeling of being an outsider, but still being part of something huge.” Nobody could know what true metal is better than Richard McDeid and his twenty-three year old son, Mason.

Mason McDeid has been living with a difficult case of Cerebral palsy since birth. Mason has undergone 132 surgeries for his condition, as far as Richard has counted. “From simple GJ feeding tube replacements, which I now do at home, to a 16-hour spinal surgery that put two titanium bars in his back — kids with cerebral palsy have very bad scoliosis, and Mason’s was so bad that it would stop him from breathing,” Richard explained, resulting in his son’s inability to speak . Richard would detail that “Mason’s trouble is spasticity constantly pulling his bones out of place, so a couple surgeries were pump replacements [the pumps provided a constant supply of drugs that treat muscle spasms]. Mason would also get Botox shots every three months to control that, but the problem was that he needed 32-plus shots each time, so we put him to sleep for all of them.” Under-development and/or damage to the parts of Mason’s brain that control movement, balance and posture would cause him a great deal of pain as a child, resulting in Mason incessantly crying. Any amount of soothing lullaby music or comfort from his father, Richard, would work to no avail. He did everything a loving father possibly could, with no result in sight.

Richard refused to give in, for the sake of easing his son’s torment. He knew he was a simple father, doing his best, and he knew he was metal. So what did he do? He reached for a tape from his music collection, a live show featuring Metallica’s album ‘Live Shit: Binge & Purge’. The loud, primal energy that is Metallica’s music should have shattered the Earth itself, but instead soothed young Mason, lulling him to sleep almost instantly. Richard realized that metal had been the answer all along.

Even science supports Heavy Metal. Researchers from Australia’s University of Queensland published a 2015 study in ‘Frontiers in Human Neuroscience’, asking thirty-nine extreme-music lovers to go into detail about frustrating things in their life to anger them, while monitoring their hearts and the subject’s personally acknowledged level of anger. After the anger-inducing process, the subjects either sat in silence, or were given their extreme song of choice. Even though the music was extreme, the researchers were surprised to find that the music had a calming effect, akin to even sitting in silence. University of Queensland student and study co-author, Leah Sharman, discovered that music helps “regulate sadness and enhanced positive emotions. The music helped them explore the full gamut of emotion they felt, but also left them feeling more active and inspired.”

So in 2016, Richard took Mason on an epic quest, leading them to experience 450 bands within the year. But Mason is wheel-chair bound, leading to Richard’s shocking discovery – though the Metal community was very accepting of his son’s condition, many of these venues often lacked wheelchair access. Though Richard recalls Warped Tour did well providing reasonable accommodation through their wristband system for those with special needs, he can also recall having to wait four hours outside of a Chicago stadium, eventually finding a way into the back entrance in order for his son to attend the show. Even with all that, entrance to the show was merely a single obstacle; restrooms, food, water- all very difficult resources during a hot day, surrounded by thousands of people. Richard knows “He’ll stick out his tongue if he’s thirsty or wants more food. Very small bites are allowed, and I use a syringe to give him water or Coke — that way, I can control the speed so he doesn’t choke. That’s important if you’re under the sun all day in front of 86,000 Slipknot fans with hundreds of people crowd surfing over your head. He needs to stay hydrated.”

But all the time and effort is worth it in the end, Mason beaming a beautiful smile whenever he hears the word “music”. Music gave Richard a window into communicating with and understanding his son better. Richard and Mason found their passion, and decided to put together a mini festival, called Mason Metalfest. Suddenly, Mason would develop a 107.9 degree temperature, stemming from a lung infection brought on by Pneumonia. “While we were in the hospital, bands were reaching out, and for fun, we thought we’d give Mason a big birthday party in December. But the doctors wanted me to send him to a hospice — long story short, I brought him home with a kidney tube and we had to delay the party.” But Richard and Mason had received a stunning wave of support, many local metal bands reaching out, honored to play in Mason’s name.

Thankfully, Mason would stabilize by March; just in time to hold Mason Metalfest for Cerebral Palsy Awareness Month! Needless to say it was a huge success, Richard going out of his way to thank people on stage at the end of the night. But people began to ask him if they planned to do it again: Mason Metalfest 2 will be happening March 23rd at Lee’s Liquor Lounge in Minneapolis Minnesota, courtesy of ‘The Best Seat in The House’. This year’s lineup is featuring Minnesota Local groups Hex Vortices, Krawg, SemTex, Cymothoa, Echoes of the Fallen, Solace and Murder, Karma Sutra, Forever in Grey, Mortic and Distal Descent.

Robot Helping Children with Autism in the Middle East