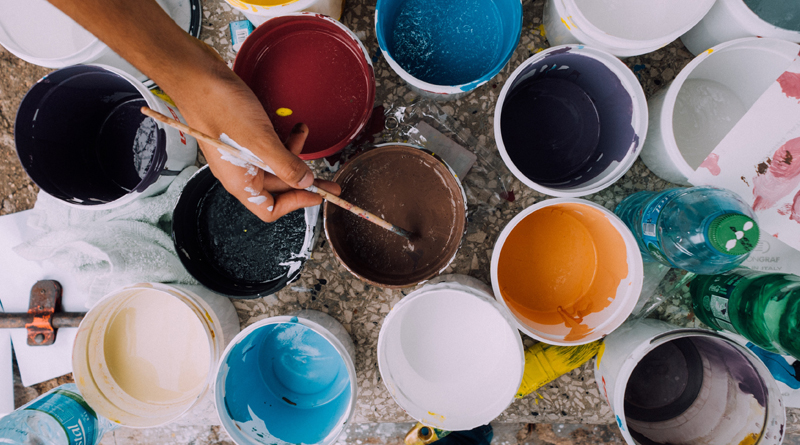 I enjoy the company of children, the patterns of trees, raising insects, and immersion in creative pursuits. My three adult children embody neurodivergence. I am a widow with a significant other who has lovingly referred to me as ‘Professor,’ although I am not one. I grew up in an era when Bettelheim’s ‘refrigerator mothering’ theory as causing autism prevailed. That has been, however if a new mother would ask a librarian to show her something on autism because her child is newly diagnosed, guess what book would probably still end up in her hands? Bettelheim. When my first child was displaying autistic ‘behaviors,’ I was met with similar backward Bettelheim-ish thinking. This from a well-intentioned family friend: “Give him to me a few weeks and I’ll straighten him out.” My reaction? A fire lit; to change perceptions of autism.

I didn’t always know I was autistic, (with Selective Mutism and ‘flat affect’). I was diagnosed in my 30’s. As a child adopted at birth, I contrasted with my parents. I was tall to their short, complex to their simple, introverted to their extroverted. My High School referred me out to look at inkblots. My classmates made puzzled remarks: “Yoo-hoo…Is anybody in there?” A teacher’s comment, as he stood before me: “She’s like… an unemotional sphynx.” Writing became a creative release to cope with these remarks. I filled 15 journals and one day turned those writings into published stories and even into a book. Drawing was an escape too. I blissfully drew for hours.

In my grade school years, my mother knew how to treat my ‘autonomic storms’ (also called meltdowns) by turning off lights and sounds and rocking me in her lap. She’d make shushing sounds as she raked her hard nails through my scalp. My mother instinctively knew how to calm the hyperventilation that often followed overstimulation. She didn’t understand how or why I ate the same meal every day for 6 years but she wasn’t cruel and forceful about my choices either. She allowed me to ‘be’ while gently pushing my comfort levels. She enrolled me in scouts, camp, catechism, art class, 4-H, decorating floats for parades and riding in them; and bringing me along to her parties: showers, Tupperware, cooking demos, Artex, Dutchmaid, even PTA.

As a preteen I experienced being ridiculed, bullied, and being ‘ditched’ by ‘friends.’ I substituted these hurts for something positive that fueled and filled me: learning. I’d sit in the hall closet with the bare sweaty pipes behind me. There was just enough room in the closet for the pipes, a metal bureau spray-painted garish green, a small lamp with a bendable neck to direct light to my studies, the chair, and me. I had a magnifying glass, microscope, chemistry set and books too, (because the internet did not yet exist). These items I kept in the bureau drawers with the objects I closely studied and catalogued: my driftwood, shells, dead insects and beloved rock collection.

When I was 12, I tried alcohol to ‘change’ my much-hated differentness and was very lucky to wake up from the coma. Nowadays I embrace differentness. Truly the very Earth could not exist without biodiversity existing. I rarely drink now, out of respect for my brain and other organs. By far I am the least conformist of anyone I know. Rigid and fixed in habit perhaps, but I’m malleable too. I’m a conundrum of contrasts. I so wish for the newly diagnosed to know they are not alone and their differentness is divinely okay! That long ago experience has taught me how important it truly is to properly recognize and acknowledge autistics as early in their lives as possible.

I long for a Golden Age of sorts, where there is no set societal ‘norm.’ I didn’t know I wanted to be a biological research scientist until I was in my 40s. By this time, it was too late to use the College GI Bill my Korean Vet father never knew he could pass on to me when he did not use it himself. I believe my individuality and capacity for learning would’ve lent itself well to scientific pursuits.

This brings to mind the kiki and bouba test. In the experiment, non-autistics and autistics were shown two pictures: one was a shape with rounded areas, the other was a jagged shape. The participants were asked, “Which one would you name bouba, and which one would you name kiki?” The majority of non-autistics labelled the round one bouba and the jagged shape kiki. This was not true for autistics. Their responses were mixed. This is due to singular thinking. Individuality.

I so wish for the newly diagnosed to know they are not alone and their differentness is divinely okay! That long ago experience has taught me how important it truly is to properly recognize and acknowledge autistics as early in their lives as possible.

When people speak, I have always imagined the font of their words as appearing before me. For example, some folks speak in Bookman Old Style, and some in Comic Sans. I feel as though, if my own words are unexpressed, they’ll leak out my mouth as I sleep in Times New Roman font. I have said this before in my writings, writing is imperative to me for preventing this word pillow-drool. If there is a situation that has come up, and I was mute beyond my willful control, I release the words by ‘writing it out’ and I feel so much better.

During my years as a young adult, I was beginning to sell my writing; and I discovered I could paint. I still didn’t like to order at restaurants, but I did my best. I didn’t drive but I learned public transit. I stumbled with small talk, but I was engaging with people anyway. I avoided many social engagements, but I accepted as many as I felt capable of attending. Painting became the outlet when I was overwrought.

Then in 1999, my spouse was given 5 years to live. He slowly became paralyzed and lost his ability to speak. I became his voice. I was trained on accessibility equipment to help my spouse communicate, by strapping a contraption with a laser dot to his forehead. I learned to use, clean and care for many different types of machines. I put him through many at-home physical therapies, saw to his hygiene, and fed him through a feeding tube (while caring for three children). I designed a communication board when his voice quit altogether. It was cardboard with letters and phrases written across it. I would point, he’d blink. But I had no time for art. Without my release mechanism, how could I cope effectively and ward off adult shutdowns? 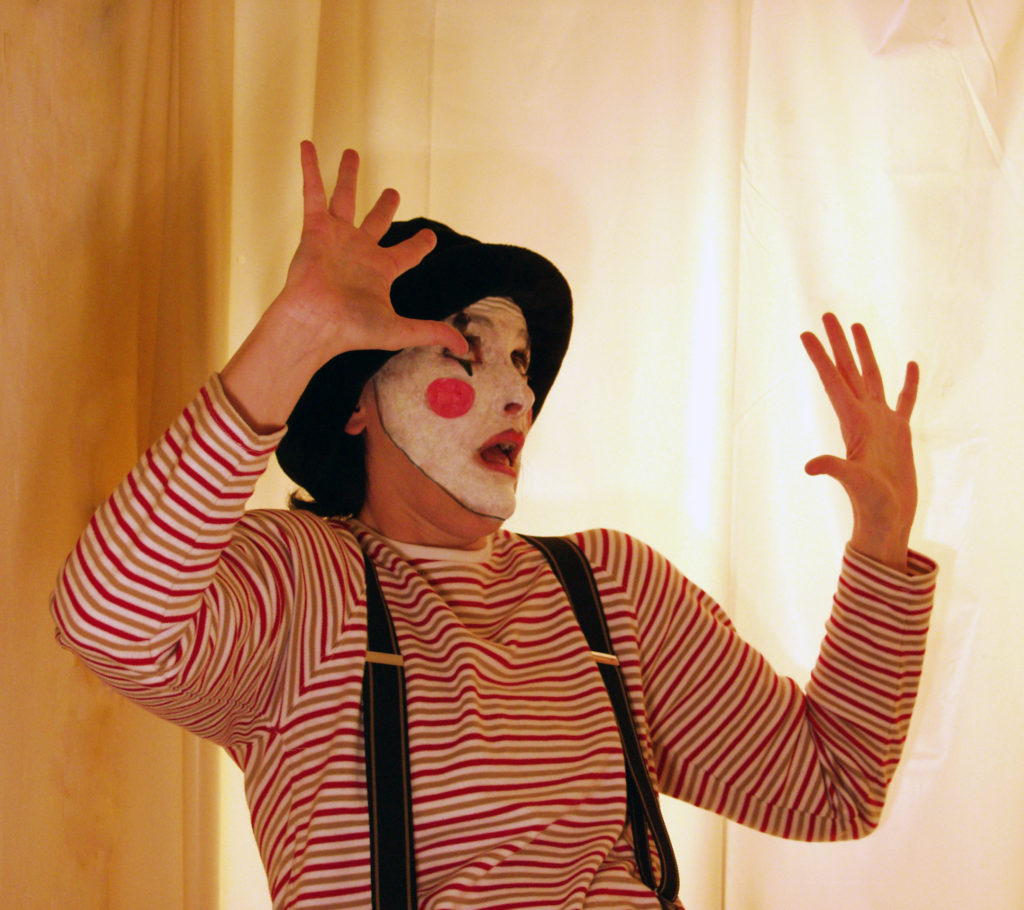 Like this: I used the wee hours of the morning, while the household rested, to work on my book in earnest. I went about my daily caregiver activities dressed in full mime attire and mime make-up. Hey, mimes don’t have to speak! No one batted an eye, being used to my “quirks.’ I had found a brilliant release, a way to cope- once again, through art.

Today I am not a biological research scientist, but I feed an inner need to learn, to understand, when I enter the portals which are books. I am the author of the memoir Under The Banana Moon, and an artist whose work is going for sums I could never have envisioned. Few people know what my “Shattered Image Self Portrait” truly means. I have sold many versions of it and it has appeared on the cover of the Art Of Autism book Shattering Myths.

I give panel talks, book signings, do collage workshops and presentations. I have met incredible people (Judy Rosenfield, Professor Elizabeth Stringer-Keefe, Keri Bowers, etc.) who have been finely attuned and respectful of my unique needs. Together we found ways together I could truly be heard. These women listened to me. I learned along the way that Nothing Changed=Nothing Changes. I had to make mistakes, not unlike the mouse that keeps hitting the wall several times before it realizes to try a different direction. Imagine the GPS voice: Recalculating! There is self-satisfaction in rerouting, if one forgives personal mistakes, and embraces malleability. I am not where I wish to be but I am where I chose to be. The things I put the most attention on, grew. I’ve learned to work toward utilizing the skill-sets I have and not giving negatives much credence. It is easy to be upset over things I can’t control; so I paint that, or I write it. Being proactive is a release of sorts. The brain reaches a theta state during painting and writing which my brain seems to need. I am not a stone, as a relative remarked at a funeral. I am not an unemotional sphynx. I am not quiet because I have nothing to say.

I work part-time as a software tester. If all goes well (I have been studying and learning two years) I may qualify to be trained as an Accessibility Tester this year. This means I can help to ensure technology meets the standards necessary for everyone to access it; regardless of disability. It’s like coming full circle!

Share on FacebookShare on TwitterShare on Linkedin
Kimberly Tucker

Kimberly Gerry Tucker is the author of the memoir “Under The Banana Moon”, and a professional artist whose work was featured on the cover of the Art Of Autism book “Shattering Myths.” She gives panel talks, book signings, and does collage workshops and presentations. She also works part-time as a software tester, and is working to become an Accessibility Tester.

Shaudae McMillan discusses the challenges autism parents have when seeking support for themselves, and offers tips to find it.

When Is It Time to Become the Guardian of your Aging Parent?

Jill Poser – Kammet, CGCM offers tips for navigating the complex and difficult decisions over claiming guardianship of a parent.

Darlene Lancer, JD, LMFT discusses the feelings that narcissists hide, and how to look out for their methods of obfuscation.