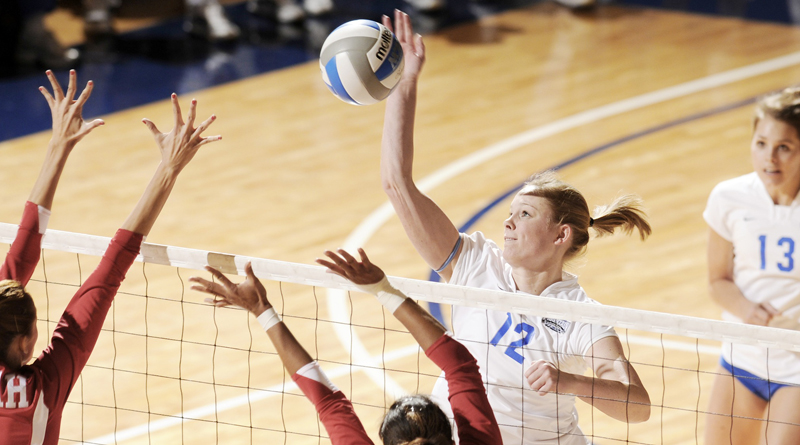 Stephanie Cahill was told six years ago that she probably wouldn’t graduate from high school, and that college wasn’t an option. This bleak forecast was given to her by a neurologist immediately after Cahill was injured playing youth volleyball. A severe blow to the head gave her a concussion; just one year earlier, Cahill suffered another, nearly identical injury under the same circumstances. Despite her two sports-related head wounds and the pessimism of medical professionals, she is now in her junior year at Arizona State University, with a double major in business law and psychology.

Even though Cahill is doing much better than expected, she still has difficulties due to her injuries. “Most people don’t see concussion as a serious injury. I’ve been struggling. Certain things have been hard. Reading is still hard. Memory is still hard. Comprehension is hard. … I still have very severe issues. I’ve had to fight my way back.”

It hasn’t been easy for her along the way. Cahill tested in the bottom 1% in the nation in terms of severity of concussion impact (the most severe impairment). She was forced out of volleyball at 14 due to her injuries, missed out on classes her junior year, and had to take double classes in summer school in order to graduate. Cahill’s challenges required her to hire a tutor in order to pass the SAT.
In addition to her memory and perceptual difficulties, Cahill’s injuries sent her into an identity crisis. “Before the concussions I had always identified as an athlete because that’s who I was,” she said. “When I lost that identity, I didn’t know what to do.”

Cahill’s loss of identity caused depression, anxiety, irritability, and inability to properly manage stress. She expressed her desire to use National Concussion Awareness Day, September 21, to reach out to other people who are suffering from the same symptoms. “What’s motivating me to do this is that I don’t want other people in my situation to feel hopeless,” Cahill said. “I had a good support system, and I know a lot of other people don’t have that and are going it alone. I don’t want them to think they can’t recover.”

Cahill stresses that her case is not unique. Many concussion victims have difficulty with comprehension, reading, and/or cognition. Cahill has lost nearly all of her ability to understand ideas or concepts she reads. As a way to circumvent this, she listens to textbooks on tape, which are much easier for her to grasp. She uses flashcards and pictures to reinforce her memories. Although Cahill has found unexpected success in rewiring her brain, neuroplasticity has a cost: she needs to study for twice as long in order to pass exams. “All of this is through trial and error,” Cahill said. “My mind is being rewired, and it can be exhausting and overwhelming at times.”

Part of what makes Stephanie Cahill so important as an advocate is that she is adequately seeking help for her condition. Most athletes, especially young men, don’t report their conditions and think they just have to work it out alone. This mentality is prevalent in a large number of coaches and athletes, and men’s football is where concussions are seen the most often. This is suspected due to the large team sizes and the nature of football as a rough contact sport, regardless of protective gear. Michael Lavoie, a faculty associate at the College of Integrative Sciences and Arts and division chief for pediatric and neuropsychology at Phoenix Children’s Hospital recalls a patient of his. “Just the other day I saw a male athlete who suffered a concussion last year in a helmet-to-helmet collision in football and didn’t tell anybody,” Lavoie said. “His grades declined and he was failing. No one could figure out why, and the school thought he might have a learning disability. He didn’t tell anyone because he thought he had to deal with it and tough it out.”

Women are much more likely to self-report their symptoms. “Last year I called it ‘The Year of the Cheerleader,’ because every week I saw a new case from cheer and gymnastics,” Lavoie said.
Cahill says that once she earns her two bachelor’s degrees in May 2020, she wants to go to law school in order to become an advocate for people with brain and mental health issues like her. “They’re going to have issues with school and their scholastics, and they’re going to need someone to fight for them to stay in school. There’s also going to be issues getting jobs,” Cahill said. “I want to be sure their voices get heard.”

A new app has been released for the iPhone which passively monitors user input in order to alert bipolar users of manic episodes.