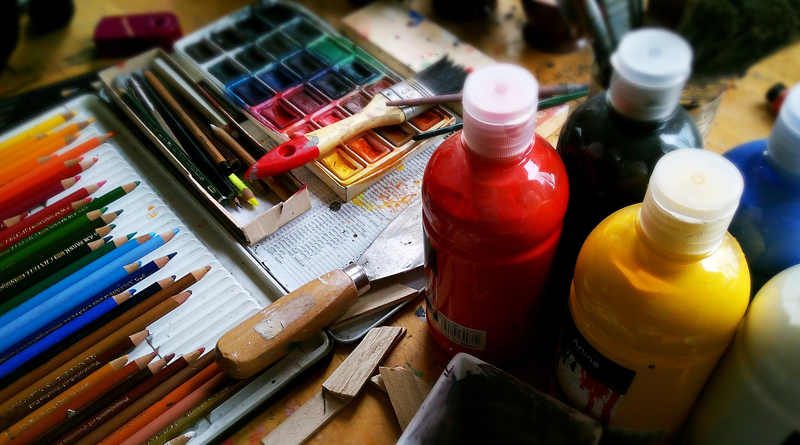 Creativity comes in many different colors for Jenna Line; an artist who battles bipolar disorder one brushstroke at a time. “When I feel manic, I feel more creative,” says the Hagerstown native. “I have a lot of racing thoughts and ideas, which is when I get most of my inspiration.”

She notes that, “there’s a lot of research suggesting a relationship of bipolar disorder with creativity. But it’s just an association, not causation.”

Line recalls that as a child she would have feelings of anxiety so great, that at times it was difficult to even sit still. She began to doodle, as it often helped emit a calming effect; an act that would later provide solace from the symptoms of the disorder, which she would begin to experience at the age of 16. Over time Line’s doodles became fascinatingly complex, and that’s when she realized she needed to hone her skills as an artist. She began to paint, creating collages and constructing mixed-media art.

These two styles of work can be seen at her art exhibit titled, The Art of Resilience, which opened on Friday, July 28, at the Washington County Arts Council in downtown Hagerstown.

While reflecting on the significant role that her condition has played in the creative process of her art, Line states that “I think having the condition has enhanced my artwork. What I do as a coping mechanism during the depressed phases is use art as a coping skill, which ties into the art of resilience.”

Silver Lining, one of the paintings of the exhibit, is symbolic of the culmination of perseverance through times of tribulation. “The painting metaphorically represents the silver lining that we must find in times of hardship. It features streaks of metallic silver throughout the monochromatic color scheme,” says Line. “The mixing of black and white illustrates all-or- nothing thinking. By mixing the two, we can identify the grey areas in life to help us cope.”

Art has proven to be beneficial to Line in many ways; not only did it help combat the bipolar disorder, but it also aided her during her recovery from anorexia nervosa as well. Overcoming both disorders in a way that can be described as nothing short of courageous, Line became a mental health advocate; lobbying on Capitol Hill, in an effort to promote education as well as awareness. “I do a lot of mental health advocacy to shed light on mental health, and this exhibit is using art as a way for healing,” she explains.

Line aspires to be a clinical social worker, and would like to integrate art therapy into her practice. She currently is a Master of Social Work at the University of Maryland School of Social Work. She firmly believes that through art, no matter the circumstances in one’s life, people can express feelings that they may not be able to verbalize. “I find art applicable for anyone dealing with anything, regardless if you have a mental illness or not. Everybody goes through life transitions. We have hardships such as loss and we experience stress,” says Line.

For more information about Line’s upcoming exhibit, which is open through August 29th, please visit: http://www.washingtoncountyarts.com

This piece is based on an article by Ajoya Long for Herald Mail Media, which can be seen here.

How Do We Recognize Faces? Researchers Move Closer to an Answer

No one really knows how people recognize friends and family members- but researchers at Carnegie Mellon University are trying to change that.

Through the mapping of these receptors and how they activate, researchers in the future may be able to produce safer, more efficient drugs for insomnia.