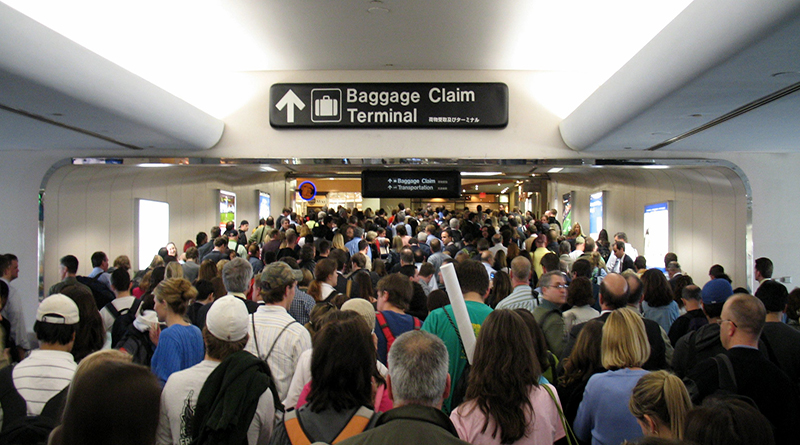 Different brains look at holiday air travel differently. Some brains don’t mind it; others don’t deal with it too well. The way my brain is, I don’t much care for the whole air travel process any time of the year, but particularly during the holidays. That’s me.

This past Thanksgiving, my girlfriend/significant other Gretchen and I decided to head to her ski condo in the mountains outside Denver. Gretchen’s 16-year-old son and two of his friends would be accompanying us. Now, if it’s just Gretchen and me traveling, air travel isn’t too bad, We either leave together for the airport so we’ll arrive and be at the gate fully 2 hours before the flight, in order to placate my anxiety. Or, she’ll just meet me at the gate whenever she gets there. But when other people are involved it becomes a nightmare of anxiety for me.

Sometimes, the anxiety begins well before the trip, and this was one such time. My wonderful daughter Rebecca was spending the Thanksgiving holiday with her mom, who is likewise wonderful. Rebecca may be an adult perfectly capable of making her own decisions, but I couldn’t help becoming anxious and worried. What if she needs me? Is it wrong for me to be so far away from her during a holiday? Add in the guilt feelings of the divorced dad, throw in some holiday season depression, multiply by traveling anxiety: that was me.

The way my brain works, I have to get to the airport two hours early, which meant getting there at 4:45 a.m. Arriving early relieves my anxiety some. I worry about the lines being long. I worry about forgetting which pocket my ID is in. I worry about forgetting my computer after I go through security. Or forgetting my wallet. (When I mention this to Rebecca, she asks, “Why don’t you read the chapter in your Aspertools book about making a checklist?”) I worry about being stopped when I go through the scanner because I have two total hip replacements. Then, after I go through the scanner, I worry that if they frisk me they’re going to feel my broken rib, which sticks out on my left side, and they suspect I’m carrying a gun. (That broken rib was courtesy of the great 5 time world champion Roberto Duran, during our exhibition boxing match in 1990 during my pro fight career. Exhibition? Hmm. As I recall, I took a good beating that night, even though Roberto was a middleweight and I was a heavyweight.)

We got to the airport and went to the Southwest terminal. I like Southwest because they’re friendly, they don’t hassle you, charge extra for bags, or penalize you if you change your reservation, and they offer an early bird option. You pay extra on the ticket when you purchase it but you’re automatically checked in with a favorable position in the boarding process .

I was relieved to see that the lines for security weren’t too bad. As I emptied out my pockets to put everything into my computer bag, Gretchen decided she was going to go outside and check on the boys. I break into a cold sweat. How long will that take her? How can I get in line without her? She isn’t back yet? I started getting ticked off by the crazy idea that she’d left me in limbo.

Now, let me give you an idea of how Gretchen’s brain works: she doesn’t care if she has 10 minutes before the plane takes off, she’ll make it work. She’s a very busy endodontist (a dentist specializing in root canals), and I think she could’ve stopped off for two last minute emergency patients on her way to the airport and still would be greeting the TSA agents with a smile.

When Gretchen came back she said, “Why don’t you go ahead to the gate, I’ll stay here with the boys and make sure they get everything done they need to.” For some reason this made me angrier and I stormed off toward security to begin the arduous process of going through TSA…

A few minutes later Gretchen breezed through TSA because she had been registered for pre-clearance. Trying to be helpful, she asked if she could take my computer bag. I start envisioning apocalyptic scenarios of the bag getting lost, or stolen, or countless other improbabilities. I clutched it tightly and said, “No, I’ll take it.” She said she was just trying to be helpful. In retrospect, as I write this account, it was amazing she didn’t get mad at me- but luckily she knows how my brain works. Our two brains are very different.

Once I made it through my first thoughts weren’t relief. Instead I worriedly triple checked that I had collected all my things. Did I get my wallet? Could anything have fallen out of it? Do I have all my electronics? What if the x-ray scrambled my computer’s hard drive? I’d better check it as soon as I reach the gate. And indeed that was the finish line I was really worried about: reach the gate and I can finally relax.

Gretchen and the boys are enjoying the airport’s shops and talking about getting some snacks. I’m on a mission: reach the Denver gate- the place where I can finally relax.

I’m looking hurriedly up at the many confusing screens to locate the Denver flight. After navigating the crowds of other holiday travellers, I reach my destination. I find a great place to sit, one with the gate in eyeshot. I can plug in my Mac computer! I sit down, and take out my laptop to do some work. The computer turns out to be no worse the wear from the x-ray machines. As I scan through emails and clatter away at the keyboard, I feel relaxed and “in the zone.” Hurray!

Not long after, Gretchen finds me and brings me some breakfast and some decaff coffee just the way I like it, with two Stevias and skim milk. She leans down and said in her sweet voice, “Hackie, I hate to say this, stay calm, but you’re at the wrong Denver gate. The direct flight to Denver gate is over on the other side.”

I’d been so focused on all my worries, all my anxieties, and in such a hurry to finally get through that “finish line” I didn’t realize I was at the wrong gate. Nice job, different brain. If I’d been traveling alone, I probably would have missed my flight. I wouldn’t have heard the boarding announcement because I’m hard of hearing and don’t like to wear my hearing aids in the noisy airport.

The five of us boarded the plane. Gretchen got the three boys seated and she and I settled into our seats. She started flipping through a magazine. The way her brain is wired, she wasn’t anxious at all. She was already having a good time; she’d been working hard and she was ready for a vacation. As for me, I was trying to figure out how to come down from being in anxious-takeoff-mode to “We’re finally on a nice vacation” mode. A drink might’ve helped, but 6:45 a.m. was way too early.

As the flight progressed though, Gretchen’s warmth and relaxed attitude became infectious, and my tension eased up a bit. As I said, our brains are very different. I can never have the sort of brain she has. No matter how much I try to tell myself not to be anxious, it’s like telling an insomniac “Why don’t you just go get some sleep?”

In moments like this I think about how lucky I am to have Gretchen in my life. Someone that is understanding and patient with my different brain. She provides the calm my brain refuses to generate. And I wonder, just as her brain is complementary to mine, maybe the reverse is true as well. Maybe her laid back brain needs the help of my cautious, detail-obsessed, tense brain. Maybe me being anxious about all the details lets her instead focus on the big picture. Who knows?

I think about ALL the different brains in my life, all varying, but all meshing and complementing mine in interesting and important ways. In some ways that’s what society really is: a giant amalgamation of differences all finding ways to work together. We’re not a one-size-fits-all society. (Yet society tries to pretend that we are.)

With the holidays upon us, if you’re traveling with family, remember that each family member’s brain may be wired a bit differently. One may have some Asperger’s traits and get overwhelmed by the crowds. One may have ADHD and be unable to keep still in long lines. One may be autistic and have issues communicating with staff. One may be dyslexic and unable to quickly comprehend airport signs. You get the picture. Every brain deals with travel differently. For all of us there are things we could do to alleviate our issues- make a checklist, leave yourself plenty of time, look at airport maps ahead of time, check your gate number etc. But if there is one thing that can help all brains, regardless of their differences, it is this: having someone there for you with the patience to understand.

Happy Hanukkah, Merry Christmas and a Happy Healthy New Year to all!