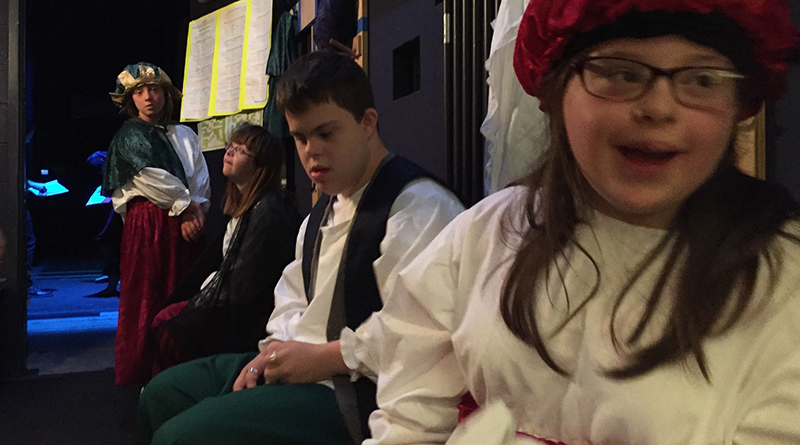 Sometimes people just need opportunities to show you what they can really do. When even their parents had doubts, a group of theater students with Down Syndrome performed a play by Shakespeare, in it’s entirety—with it’s conflicted characters, quick-paced soliloquies, surprising plot twists and all. Katie Yohe, who is a 31 year-old professionally-trained actress who studied at the Globe Theater in London, now directs a troupe of high school-age actors with Down syndrome. Yohe developed a script, scheduled auditions and alerted parents that her acting group would tackle Shakespeare classics.

Although there were some skeptical parents (one mother actually pulled her daughter out immediately), Yohe, undeterred, introduced Shakespeare to her troupe. She did this at GiGi’s Playhouse, which is a non-profit organization that offers programs for people with Down Syndrome in Chicago. Six successful productions later, Katie Yohe went on to co-found her own nonprofit organization, ABLE—Artists Breaking Limits & Expectations—with her fiancé, Lawrence Kern.

The troupe aimed to prove naysayers wrong when they took the stage at Chicago’s Shakespeare Theater for a production of Twelfth Night– and they did. The show was a prestigious exposure for the young actors, as it was open to the public and had nearly sold out of $15 tickets before the night of the performance. The actors’ production was part of the theater’s internationally recognized 400th anniversary of Shakespeare’s death.

Hollywood talent agencies and advocates for people with disabilities say it’s an inspiring step forward in the ongoing effort to include people with special needs in performing arts. Even with the 1980’s breakthrough casting of Chris Burke, a boy with Down Syndrome in the late 1980’s TV show “Life Goes On,” disabled performs are still rarely hired. According to Gail Williamson, a talent agent who specializes in actors with special needs in Studio City, California, less than 1% of actors on prime-time television today are people with disabilities. Greeting the crowd before a performance (photo courtesy ABLEensemble.com)

The matinee performance marks such a milestone for ABLE’s co-founders, Yohe and Kern, that they scheduled their wedding for the weekend of the show so family and friends from around the country could be on hand for both happy events. Yohe said, “The kids and their families, they are our family here. You can’t look at our relationship without looking at this program. We just wanted to share it with everyone.”

“It brings something that’s deep down inside that they can’t get at otherwise,” said Jacob Collins, whose 19-year-old son, Benjamin, was once mostly nonverbal and stunned ABLE directors by suddenly speaking up during practice for the performance.

The Chicago Shakespeare Theater’s producer for Shakespeare 400, Doreen Sayegh, said organizers are thrilled to include ABLE’s performance as part of the celebration. The theater’s mission is to demonstrate the modern-day relevance of the playwright’s work. “Actors go through years and years of coaching and training to find their voices in these words,” Sayegh said. “The kids feel a tremendous amount of accomplishment because they can do this thing that everybody points to as really difficult. And when your abilities are questioned — and they get up on stage and perform it — it’s amazing.”

“Five years ago, we staged our first Shakespeare play, Romeo & Juliet with an ensemble of 6 actors” Yohe said on her blog after the performance. “Our audience of just over 60 people sat on metal folding chairs and bleachers in the Fasseas Studio at The Menomonee Club. It was a beautiful show and, and as even as we’ve watched our program grow to 12, 16, and now 20 actors, we could never have imagined all that happened…”

This article is based on one published by the Chicago Tribune, which can be found here.

The First Egyptian TV Presenter with Down Syndrome

The work of University of Iowa assistant research scientist, Phillip Evan Gander, and his research team, may be bringing misophonia closer to an official diagnosis.