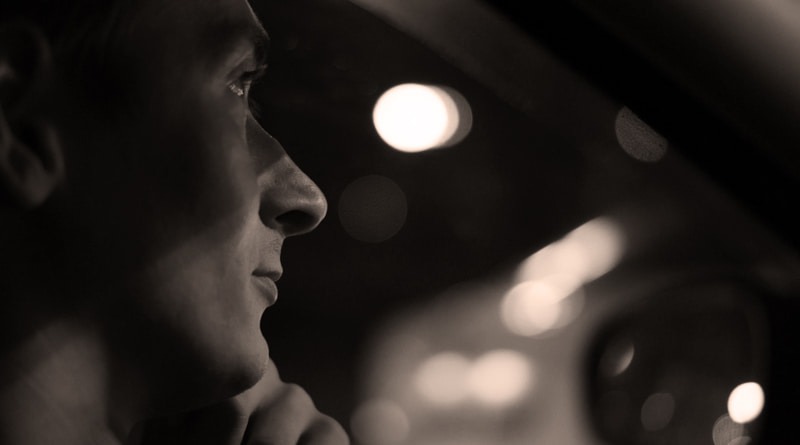 A Common Link Between Narcissists

Narcissism is many faceted and comes in several types. Narcissists will use a variety of tactics and defenses to keep you insecure and ensure their status and their needs are met. It’s easy to be confused, but it’s important to understand and spot which type of narcissist you’re dealing with. Recently, two research teams have identified a common trait.

Although there are different kinds and degrees of narcissism, for years research mainly focused on the familiar—exhibitionistic narcissists who seek the limelight. These are the boastful grandiose narcissists who are public figures and are recognizable in films. They’re described in the Diagnostic Statistical Manual of Mental Disorders (DSM) as narcissistic personality disorder (NPD).

We can all spot those charming, attention-seeking extraverts whose vanity and boldness are at times obnoxious and shameless. They’re self-absorbed, entitled, callous, exploitative, authoritarian, and aggressive. Some are physically abusive. These unempathetic, arrogant narcissists think highly of themselves, but spare no disdain for others. Helped by their extraversion, they report high self-esteem and satisfaction with their lives, despite the pain they cause others. Because they outwardly seek acclaim, attention, and domination, grandiose narcissism is externalized. Even in love, they seek power by game-playing. Many do maintain relationships, notwithstanding the lack of intimacy and the unhappiness of their partners, who are easily seduced by their charisma and boldness.

Lesser known are vulnerable narcissists (also referred to as closet, introverted, or covert narcissists). Like their grandiose kin, they’re self-absorbed, entitled, exploitative, unempathetic, manipulative, and aggressive, but they fear criticism so much that they shy away from attention. Individuals of both types of narcissism often lack autonomy, have imposter syndrome, a weak sense of self, are self-alienated, and an inability to master their environment. However, vulnerable narcissists experience these things to a markedly greater extent.

In contrast to grandiose narcissists, rather than feeling confident and self-satisfied, vulnerable narcissists are insecure and unhappy with their lives. They experience more distress, anxiety, guilt, depression, hypersensitivity, and shame. They’re conflicted, holding both inflated and negative irrational views of themselves—the latter which they project onto other people, their lives, and the future. Their negative emotionality depicts a bitter neurotic averse to personal growth. They require reinforcement for their grandiose self-image and are highly defensive when perceived criticism triggers their negative opinion of themselves.

Unlike extraverted narcissists, they lack positive relationships. Instead of boldly dominating people, they’re threat-oriented and distrustful. Their attachment style is more avoidant and anxious. They withdraw from others with hostile blame and resentment, internalizing their narcissism. Empathetic codependents feel sympathetic and want to rescue them from their misery, but end up self-sacrificing and feeling responsible for them.

Malignant narcissists are considered to be at the extreme end of the continuum of narcissism due to their cruelty and aggressiveness. They’re paranoid, immoral, and sadistic. They find pleasure in creating chaos and taking people down. These narcissists aren’t necessarily grandiose, extroverted, or neurotic, but are closely related to psychopathy, the dark triad, and anti-social personality disorder. (Houlcroft, et al. (2012)

If you have a hard time identifying which type of narcissist you’re dealing with, it might be because grandiose narcissists oscillate between states of grandiosity and vulnerability. For example, grandiose narcissists may show vulnerability and emotionality (usually anger) when their success is thwarted or their self-concept is under attack. Greater grandiosity indicates greater instability and likelihood of fluctuation. There’s little evidence that vulnerable narcissists exhibit grandiosity. (Edershile & Wright, 2019), (Rhodewalt, et al. 1998)

The Search for the Core of Narcissism

Using new techniques, recent studies have attempted to isolate a singular, unifying trait among narcissists. Researchers examined narcissism by testing distinct personality traits. Two recent models emerged: One is based on personality and the other is an integrative, transactional approach.

The Trifurcated Model of Narcissism shows that narcissism centers on three personality traits: Agentic extraversion, disagreeableness, and neuroticism. (Miller, Lynam, et al., 1917) (Agentic extraverts are authoritative and bold go-getters who pursue acclaim, achievement, and leadership positions.) Of the Big Five personality traits, disagreeableness is the only one common to both types. The model illuminates the core of narcissism to be interpersonal antagonism, shared by grandiose and vulnerable narcissists alike. It’s characterized by manipulation, hostility, entitlement, callousness, and anger. (Kaufman, et al., 2020) Vulnerable and grandiose narcissists express antagonism differently. The former are more hostile and distrustful, and the latter are more immodest and domineering. 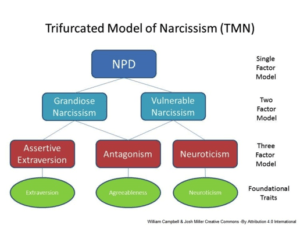 The Narcissism Spectrum Model (NSM) created by Kerzan and Herlache (2017) conceives narcissism as existing on a spectrum from grandiose to vulnerable. It demonstrates how NPD varies in severity and how traits manifest. The model reveals that both types of narcissists share a common psychological core of entitled self-importance. Narcissists believe that they and their needs are special and take precedence over those of others. This core is made up of arrogance, self-involvement, and entitlement. In fact, entitlement is reportedly the most toxic element in relationships.

Narcissists’ differing personalities express diverse qualities at various times, this model captures a fluid, functional analysis that is more representative of real life. The greater a person’s grandiosity, the less is their vulnerability and vice versa. More entitlement and risk-taking increase professional and interpersonal difficulties. The greater the vulnerability, the further away (lower) is their grandiosity.

In sum, narcissism exists on a spectrum ranging from domineering and extraverted to introverted and neurotic. The core features of narcissism are antagonism, self-importance, and entitlement, making narcissists disagreeable, uncooperative partners and work associates. Because other personality types can be antagonistic, I prefer the Spectrum Model that singles out self-important entitlement as the core of narcissism, thus distinguishing it from sociopathy and borderline personality disorder, among others.

On the other hand, vulnerable narcissists need help managing their perceptions, moods, and emotions. They resemble people with borderline personality disorder and would benefit from dialectical behavioral therapy, which is effective in reducing antagonism. Schema-focused psychotherapy and cognitive behavioral therapy are helpful for both types to reduce shame and anger.

Whatever type of narcissist you care about, the relationship is hurtful. Rather than getting your needs met, you’re undermined and drained dealing with frequent criticism, callousness, hostility, demands, and entitled expectations. Don’t spend your efforts trying to please or change a narcissist. Instead, start recovery to rebuild your self-esteem and autonomy so you’re more resilient whether you stay or go. If you’re undecided, get some individual psychotherapy, and use the tools in Dealing with a Narcissist to determine the prognosis for your relationship.

Rhodewalt, F. & Morf, C. C. (1998). On self-aggrandizement and anger: a temporal analysis of narcissism and affective reactions to success and failure. Journal of personality and social psychology, 74(3), 672.

A Different Look At PTSD

Post-Traumatic Stress Disorder is getting growing attention in quite a few places around the world. With legislations being recently passed in Canada, the Alaskan government is now following suit in their treatment and views of PTSD.

Darlene Lancer, JD, MFT discusses the ways narcissists increase their self-esteem and feel power over others.