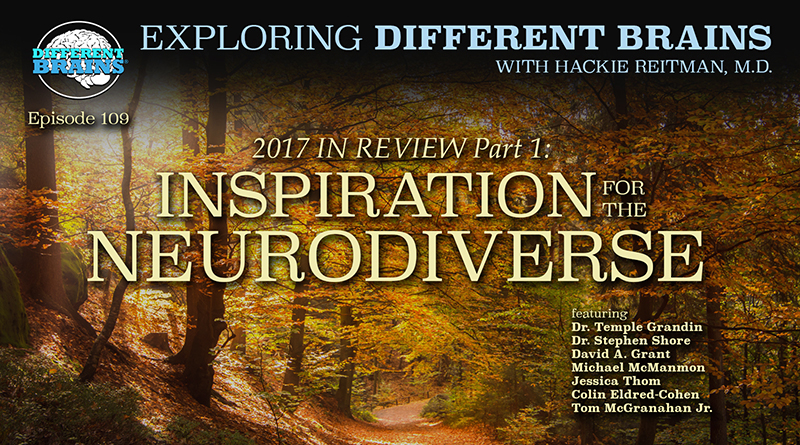 (10 mins) In part one of a special two part episode of Exploring Different Brains, Hackie Reitman, M.D. presents a handful of the great guests the show has had in 2017. For our first part, we are focusing on the amazing neurodiverse individuals we have been fortunate enough to speak with: Dr. Stephen Shore (author, autism advocate, board member for Autism Speaks, and professor at Adelphi University), David Grant (brain injury, the founder and publisher of TBI HOPE Magazine), Tom McGranahan Jr. (author and advocate for the awareness of epilepsy), Colin Eldred-Cohen (author of “The Fire Truck Who Got Lost,” comedy writer, movie reviewer, and a young man on the autism spectrum), Jessica Thom (British advocate diagnosed with Tourette’s syndrome at the age of 20, and is the co-founder of Touretteshero, as well as an artist, play worker, fundraiser), Dr. Temple Grandin (prominent author and speaker on both autism and animal behavior, professor of Animal Science at Colorado State University), and Michael McManmon, Ed.D. (speaker, writer, artist, psychologist, and founder of the College Internship Program (CIP)—a post-secondary program serving students with Asperger’s Syndrome, autism, high functioning autism, ADHD, and other learning differences).

For more information about our guests:

HACKIE REITMAN, M.D. (HR): Hi, I’m Dr. Hackie Reitman. Welcome to this special two-part episode of Exploring Different Brains. What we decided to do was to take some of the highlight interviews of all the amazing interviews we did in the year 2017, with neurodiversity leaders from all over the world. We thought we would start out the first episode, with the neurodiverse inspirational interviewees themselves, starting off with the brilliant Dr. Stephen Shore.

DAVID GRANT: One of the things that I bring to the brain injury community is an insider’s voice. I’m a layperson that has had an immense range of experiences. So we’ll leave the moniker of experts that have a lot of initials after their name but there are some things that have helped me immensely. It may actual transcend a lot of different neuro-conditions and worked out very well for the neurodiverse community. The first piece that was a game changer and it’s funny but it’s one that I advocate very highly for is the support group. I am a huge believer in peer-to-peer support. It’s hard for the first couple of months, I was totally alone in brain injury and it’s hard to say I’m unique when I am sitting in a room filled with 30 of my peers that have all experienced similar things. And within the peer-to-peer support group environment, you’re able to be in the association of those with similar challenges, although there is a say, “if you’ve seen one brain injury, you’ve seen one brain injury.” But there are some common threads to a lot of what we deal with. Memory loss, speech loss, loss of emotional filters. You know the first year I would say just about anything to anyone and that’s a story onto itself. So that association with peers has been just a game changer for me.

TOM McGRANAHAN: So when you have epilepsy, like with all kinds of other ailments, you realize you take different steps. You have to look at things in different ways to get your journey accomplished. But that doesn’t mean you stop your journey, it means you just change it. You just look into it more about what’s necessary, what step’s best to go ahead with things. And that’s why it’s so good having family and others. And by the way, I blame my wife. I told everybody, if it wasn’t for her I’d be dead by now. I wouldn’t have been paying my taxes, wouldn’t be brushing my teeth, I wouldn’t have to do any of that stuff. But it’s a good problem to have. A lot of people with disabilities is the love and care of others that helps us through the times. And then when they see us staying strong, it helps them to stay strong. So it works both ways. It works both ways between each of us.

HR: Let’s say I’m on the spectrum i haven’t quite found my niche yet… what’s the overall advice you would have for me?

COLIN ELDRED COHEN: I would say it keep trying, find something you really love and go for it, and find a good support network of friends or family or mix. Because, whether you know whether or not they will be helping you- or whether they know it or not too. Sometimes just you’re with friends and that’s when the best of you comes out. That’s what I found.

JESSICA THOM: So one of the things that we really believe at Touretteshero is that you could use art, to create change and to get people to think. And perhaps think about things that they might otherwise find difficult or to challenge stereotypes. And I had a really upsetting experience at the theatre–biscuit–several years ago when I was asked to move during the intermission because of the noises I was making. And that was in a performance where I had let the theater know, and i met the performer beforehand, and he’d explain to the whole audience that I had Tourette’s. But despite all that work, all that planning and all that thinking, I was still asked to move. And it was an incredibly humiliating and upsetting experience. And I felt–I cried, I sopped, as I separately from everybody else in the sound booth. And it made me feel like the theater wasn’t a space that I could access because it was damaging for me. It made me never want to go to the theater again. Biscuit. But rather than doing that, I was supported to see that there was a different way–biscuit. And instead, I found the only seat in the house I wouldn’t be asked to leave. On the stage–biscuit. And I recreated a show called Backstage in Biscuit Land–biscuit, which shares my journey with Tourette’s, which brings the surreal world of biscuit land, which is the world that Tourette’s creates around me to life. Biscuit. And most importantly, shares the idea that if you make art, and theatre inclusive, you make it better. You make it better art, you make it more interesting, you make it richer, and you make it more dynamic.

DR. TEMPLE GRANDIN: My mother had a really good sense of just how much to stretch me slightly outside my comfort zone so I’d keep learning and doing new things. It was her idea to have me go out to my aunt’s ranch and after I’d done my aunt’s ranch for two summers she said, “well lets do something else and we’ll do the aunt’s ranch for half the summer and we’ll do an internship at a research lab for the other half of the summer.” Also, I was an aid for a child with autism, another half of the summer. Always stretching, she never threw me into the deep end of the pool, but always stretching and doing new things. I was hostess at her parties with I was 7, 8 years old. She got me a sewing job when I was 13 years old, and when I went away to my boarding school I ran the horse barn, cleaning stalls everyday, putting the horses in and out, feeding the horses. And now, when I look back on it, riding the horses was really fun, but actually the most important thing for my development was running the horse barn and learning how to work.

MICHAEL MCMANMON: One of the rules I set for myself in the last few years which changed all of my adolescence all those years I denied myself socialization. And here’s a job reference. So I was the guy who in the office when I packed my lunch, I put it in the staff lounge and then they would come to me, all of the staff, and say “hey we’re going to lunch for Barb’s birthday, do you want to come?” I didn’t have any flexibility to do that. I knew I was eating that sandwich that I made, was in the refrigerator and I didn’t want to go because I would have to talk to people and everything and socialize and what did that do? It handicapped me socially, it handicapped me as far as promotions. It did all those things so I made a rule for myself in my older age, someone says “do you want to come over my house?” or “do you want to do this?” or “do you want to go out to eat on a Friday night” or go to this concert, unless I have an absolutely immediate really important reason to say no, I say yes. And so I’ve grown so much in the last five years even just from doing that. So this is where you become a self-change agent we have to teach our students to be able to do that for themselves.

(3 mins 19 sec) In this episode, a model throws a surprise photo shoot for his sister with Down syndrome, and Henry Winkler discusses how his book series about dyslexia is becoming a TV series! These stories and more in this week’s edition!